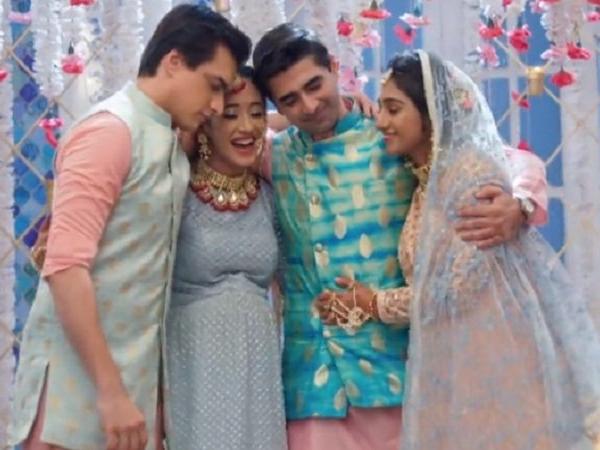 Yeh Rishta Huge decision Kartik and Naira happily celebrate their mehendi ceremony, where he introduces her to the lovely couple name, Kaira. Naira likes the name a lot and asks about its origin. He tells her that Mishti has given this name to them, by picking parts from their names. Naira likes Mishti’s thought and appreciates. She doesn’t remember that Mishti had united them for the first time and helped them realize their love. The families are happy that Naira is fine and happy, in the current situation. Kartik and Naira write Kaira on their palms with mehendi and dance in the function. Krish stays on toes for Krish. Naira misses to see her marriage photo. Everyone is happy for Naira.

When Krish cries, Naira rushes to him. The family see her love for Naira and fears that she may get unwell by staying away from Krish. They wonder what will they do if Naira falls sick again. Naksh tells them that they will give Krish to Naira, since she has given Krish to them by showing a big heart. He wants to sacrifice his happiness to give happiness to Naira. He doesn’t think for Kirti for a moment.

This hurts Kirti’s heart and infuriates her further. She can’t believe that Naksh is thinking to take such a decision without asking her once. She doesn’t want to give Krish to Naira. Kirti doesn’t want her life’s decisions to be taken by someone else. She wants to be Krish’s mother and decide for him. She doesn’t want Naksh to take this step by breaking her heart. She feels everyone just thinks of Naira all the time. Kartik and Naira have a moment. Kirti watches their happiness. She wishes someone understood her concern. She breaks her silence and takes Kartik to express her annoyance over Naksh’s decision.

Naira misses to see the marriage photo. Kartik asks Kirti what’s the matter that she is so upset. She tells him how Naksh has decided to give Krish to Naira by sacrificing their personal relations. She doesn’t want Kartik to support Naksh’s decision. She tells him that she doesn’t want to suffer because of Naira. She has been always tolerating the pain by the change of relationships between the two families. She wants Kartik and Naira to unite, but doesn’t want to support them by sacrificing her family.

She feels she doesn’t deserve to lose her child. She is against Naksh’s decision. She feels Naksh doesn’t give her any priority. She knows that he can do anything for his sister’s happiness. She decides to keep her child with her. She complains about her bad fate. Kartik consoles her, knowing she is in pain by this big fear of losing Krish. Kirti doesn’t want to live without her child. Kartik and Kirti hide the matter from Naira. Kirti tells Naira that she is emotional about her marriage and farewell.

Naira promises to stay in touch with the family. Kartik wants to find some solution to Kirti’s insecurities. He finds this a big problem, since he has failed as a brother. He didn’t give any happiness to Kirti. He wants to keep Kirti’s wish and become selfless for sometime. Naira takes Kartik along to declare her love for him in front of everyone. She tells him that she just loves Kartik, since he is the one whom her heart longs for. Kartik gets compelled to call off the wedding for the sake of Kirti’s happiness. He doesn’t want to complicate Kirti’s life further.