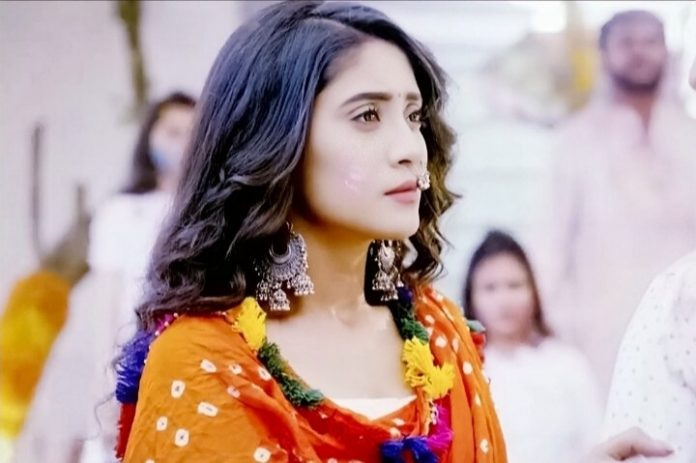 Rishta Shakti Sitara Muskaan and more. Yeh Rishta Kya Kehlata Hai: Naira and Kartik enjoy their Sangeet. They perform wonderfully like always. Everyone dances with the couple. The family is very happy seeing both of them happy. Naira proposes Kartik and fulfills her old love vows, surprising Kartik. The couple is marrying for the third time, and in an equally grand style. Kirti doesn’t enjoy the Sangeet and stays worried for Krish. Naira learns about Krish’s life in danger, when the fuse box catches fire. Naira risks her life to rush and save Krish, while Kartik goes to rescue Kirti Naksh runs to save Naira.

Kartik realizes that Naksh is just focussing on Naira, and not Kirti. He feels Kirti’s insecurities are true. Kirti wishes to become Naksh’s priority. Naira bids bye to Kartik and compliments on his good values. He is much hurt by Kirti’s pain. He gets into a dilemma over the planned wedding happening the next day. Kartik and Naira get into a cute moment, where they come together by destiny. He wants to call off the marriage to answer Kirti’s dilemma.

Shakti: Sukha tells his family, Varun and others that the case will have a big effect not only on the society but on them too. He asks them to hear carefully what he will say. He makes a plan. Harman and Soumya manage to get some witnesses. Harman asks Harak Singh to take Soumya and others and says he will bring Lawyer and witnesses in the court. Sukha gets Harman’s car compromised. Harman is on the way to court when he meets with an accident. Soumya eagerly waits for Harman in the court. Judge asks Varun’s lawyer to start the case and asks about Soumya’s lawyer. Soumya gets worried as Harman, Sehgal and witnesses don’t reach court. She suspects foul play.

Roop:
Roop wants Shamsher to leave drinking wine, and get back to his job again. He wants him to get confidence and trust in his family. He uses mouthwash so that wine smell doesn’t come from his mouth. Ishika tells him that she can bear the wine smell, but can’t bear his changed behavior. Roop asks her to hide behind her ego. He asks everyone to accept his sayings if they want him to celebrate Holi with them. He starts ruling on them to praise Shamsher and to take him out from wine addiction. Everyone is shocked.

Ek Thi Rani Ek Tha Ravan: Rivaaj tortures Rukmani and makes her shiver in cold due to AC cold. Prem Latha acts nice to Rukmani and asks her to have khichdi made by her. Shivraj also assures her not to worry. Rani tries to tell her that Rivaaj is a bad guy. Rivaaj threatens taking Rukmani might suffer because of her one move. Rani gets an idea of seeing Raghav’s toy and thanks him. She searches for Rivaaj’s phone and gets it in his room. She finds some proofs. Meanwhile, Rivaaj comes to the room and takes his phone. He tells Rani that she can’t harm him.

Sitara:
Vrinda plans to attack Viraj’s dad. She fools him and gets him to Vishlok. Sitara reaches there in nick of the time and saves Viraj’s dad. She fails Vrinda’s plan. Sitara protects the royal family. She becomes the savior of Rajasa. She doesn’t let Vrinda poison Rajasa. Mahamaa is supporting Vrinda in her evil intentions. Sitara opposes Vrinda’s attacks. They both have a mega fight. Sitara takes Rajasa home.

Muskaan:
Ronak and Muskaan happily celebrate holi and perform on a romantic song. Ronak decides to express his love to her. Ronak isn’t celebrating the festival well because of the sorrowful time post Mrs. Sinha’s death and the attack on Kajal. Ronak and Muskaan can’t live the moments in real, but they have a romantic dream sequence. Police intervenes in the function and investigates Mrs. Sinha’s case.