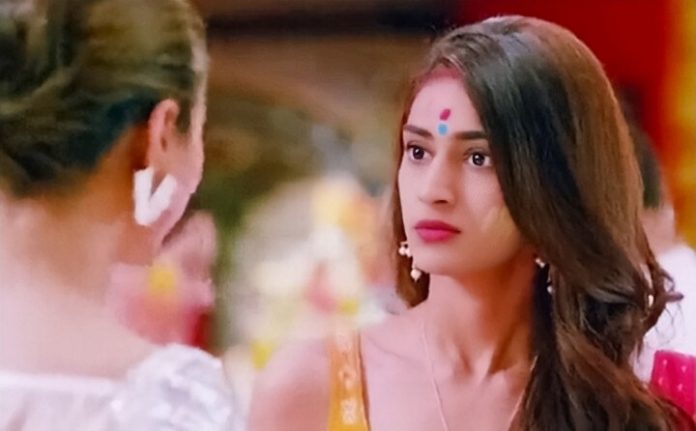 Kasautii Krishna Star Plus Hits. Shukla poses a big hurdle in Krishna and Veer’s marriage. He can’t bear the fact that his son’s widow is marrying someone, without informing her in-laws. He threatens to teach a lesson to Veer, who has charmed Radhe’s widow and convinced her for marriage. Shukla and his men create a storm in the temple mandap and ruin everything. They try hard to stop the marriage. They get the groom Veer with them. Veer gets into a fight with the evil men. He has a big responsibility to protect his family from Shukla’s evil goons. Veer gets much injured during the fight.

Shukla wants Triloki to break Veer’s bones. Gajanan returns home and finds Shukla and Trilok missing. He tries to enquire about them. He learns about Krishna, who is in deep trouble because of Shukla. He learns that Krishna is marrying Veer. He wants to support the marriage.

Gajanan asks Shuklain to think of Krishna’s happiness and future, since Radhe is dead now. He feels its their responsibility that they secure Krishna’s happiness. Lali and Gajanan take a stand for Krishna and try to explain the family. Krishna takes charge of the situation and scolds Shukla. Lali reminds Shukla how Krishna has always obeyed them and helped them since she loves the family. She doesn’t want Krishna to get more humiliation and sorrow from them. Lali rebels for the very first time and tells Shuklain that she will definitely support Krishna.

Shukla and Krishna get into a heated argument. Krishna tells him that she isn’t doing wrong to marry Veer, since she has full right to live her life. Shukla goes to hurt Krishna to stop her marriage. Krishna gets help in the form of Gajanan, who stops Shukla from taking any wrong move. He protects Krishna like a brother. He wants Krishna to get married to Veer. Gajanan gets Krishna and Veer married. Shukla plans something more evil against Veer to ruin his medical career and also his happiness.

Shantanu tests Kajal by sending a dog close to her. He plans the dog attack on Kajal to check if she will react and get up from her place, which would prove her drama. Kajal doesn’t get caught by Shantanu, since Ronak comes to her rescue. Ronak scolds Shantanu for his stupid plans which could have put Kajal’s life in danger. Kajal gets revengeful against Shantanu’s investigation. She decides to punish him. Ronak and Muskaan stay in their own world and plan little surprises for each other. They make romantic gestures to express their feelings. On the other hand, Kajal wants to make sure that police doesn’t suspect her for the murders. Kajal plays a safe game and misleads Ronak.

Kaal Bhairav Rahasya:
The story takes a big twist with the revelation of Brahmanand, Lali’s son. Brahmanand has an evil motive, that’s to acquire the special idol and also its powers. He sends his special aides to find the idol. Vandana can’t believe that her first love Akshay also works for her grandfather. Akshay reveals his real identity to her and turns stern towards her. Vandana wants to find the idol and gain its powers. Archana gets the fresh hints to locate the idol.

She takes her aides along to get the idol before the idol reaches in wrong hands. She has a motive to purify the idol to get the royal family rid of the old curse. Archana and Vandana rush to get the idol first. Brahmanand comes into picture and warns Archana of his evil ways. He limits Archana from reaching the idol.

Kasautii Zindagii Kay:
Anurag looks after Prerna, since she isn’t in her senses. Komolika wants to find Prerna and take advantage of her intoxication so that she gets Prerna’s signs on the legal documents. Prerna gets sweet and loving towards Anurag again. She tells him that she knows his true love which reflects in his eyes. He asks her to take rest. Prerna wants Anurag to be with her.

Anurag tells her that he only wants to be with her and celebrate holi. Prerna seeks his permission to play holi with him. They have a cute romantic moment. On the other hand, Anupam takes his friend’s help to turn Nivedita jealous. He wishes that Nivedita falls in love with him.

Anurag and Prerna play holi like never before. She breaks her pregnancy news to him. Anurag can’t believe what she just said to him. Prerna tells him that she didn’t wish to reveal this to him, and had to tell it now on his asking. Anurag also gets intoxicated. He cutely talks to the baby. They have a moment of happiness. Nivedita takes a strict action against Anupam’s affair. Anupam gets happy that she is caring for him and their relation. Komolika searches for Anurag. She learns that he is with Prerna. She wonders if he is cheating her. She wants to catch them red-handed and confront Anurag. Anurag promises to look after Prerna and his coming baby. Prerna requests Anurag to marry her in a proper way to fulfill her wish. Anurag agrees to marry her once again.