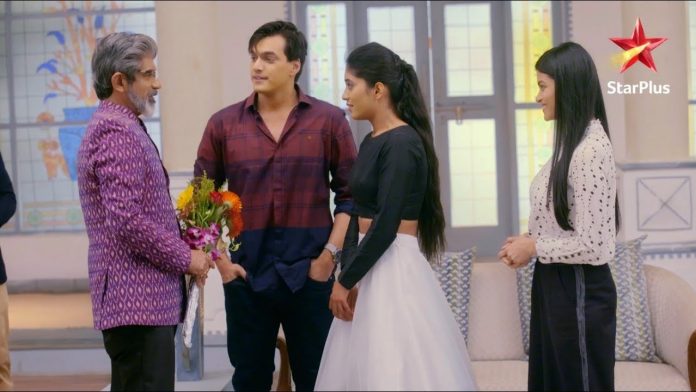 Yeh Rishta Jhansi Ki Rani Aapke Aa Jane Se. Purushottam is evil-minded. He finds ways to meet Naira. Kartik and Naira have a romantic moment. They play a game in the lawn. Kartik is happy to have her back. He promises her that there won’t be any troubles between them now. They aren’t aware of the big trouble coming their way. Purushottam breaks their moment. He gets gifts for the family and impresses them by showing a big heart. Kartik regards Purushottam as his father since his childhood. He has the same affection towards him.

Kartik loves Purushottam and doesn’t know his intentions. Naira senses his evil intentions by his behavior. She feels something is definitely wrong. She will be soon exposing Purushottam’s evil deeds. Naira faces discomfort with Purushottam’s coming and also learns about Mansi’s past. She will be becoming voice for Mansi against Purushottam.

Aapke Aa Jane Se:
Arya does Guddu’s final rites. Sahil meets Arya to apologize to her. Arya slaps Sahil and blames him for ruining her life. She tells him that she won’t regard him her father again, she has no relations with him or Vedika. She breaks all ties with Sahil and Vedika, since Sahil has turned her into a widow. She is in trauma over Guddu’s loss. She thinks Sahil and Vedika will never understand her sorrow. Vedika has to prove Sahil’s innocence.

Jhansi Ki Rani:
The Britishers pose the cattle tax on the poor villahers. They threaten to snatch the cattle. The villagers meet Maharaj Gangadhar and ask him to save them, since they will lose everything if they lose their cattle. Gangadhar gets upset and thinks how to help the villagers. He feels helpless. Manu hears the people’s problem on the first day in the royal court. She advises Gangadhar to pay the tax by using the money from their royal treasures. She asks him to take the decision in favor of the people. Gangadhar gets angry on Manu, since she thinks she is the smartest. He has to think more maturely so that everything stays balanced. Manu and Gangadhar’s equation isn’t much good.