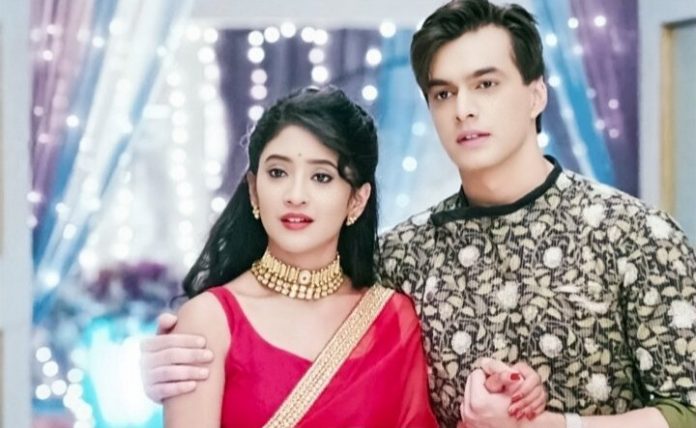 Kartik Naira Yeh Rishta Big twists. Naira gets forgiven by Purushottam. He tells her that she has met him for the first time, so she won’t know him well so soon. He doesn’t want her to take tension. Mansi observes his wickedness once again. She feels Purushottam is eyeing Naira in an evil way. Gayu gets sad and makes the Gangaur idol alone. Samarth comes to her help. Naira finds Gayu upset and asks the reason. She asks Gayu to take care of her health. Gayu can’t tell the truth to anyone. Kartik finds Gayu hiding the truth. He asks her what’s the secret. Naira tells him about a surprise she is planning. She apologizes to Kartik. He asks her not to get upset over anything.

He tells her that Purushottam is special for the entire family. He asks her not to hurt Purushottam. Kartik finds a chance to romance under the table. He tells her that he can romance everywhere. He is happy to be daring and thrilling like his wife. She tells him that she won’t leave him now even if anyone comes. She asks him not to ruin his romance. Naira plans a romantic surprise for Kartik. She gets interrupted by Purushottam. He compliments the wonderful romantic setting in the room. She gets embarrassed.

He compliments her beauty and asks her to spend time with Kartik. Her romantic surprise gets spoiled because of Purushottam. Kartik finds Naira scared. She doesn’t let her fears come between her plans. She goes on to romance Kartik. Kartik tells Naira that he is still the same, her favorite frog, while she is always his lioness. The couple gets decked up to celebrate the grand Gangaur with the family. Purushottam finds some way to get close to Naira. He tells them that he will click pictures of the beautiful women, so that everything gets captured. Kartik finds Gayu unwell. He asks Naira to take care of Gayu.

He tells Naira that he is aware of Gayu’s pregnancy. Naira wonders how he got to know about Gayu’s pregnancy. He tells her that he knows everything, since he has seen her closely observed Gayu’s cautiousness. He asks Naira not to let Gayu keep any fast. Naira apologizes for hiding this truth. He tells her that he is sure that Gayu has forbidden her from telling the truth. Naira tells him that Gayu doesn’t want Rama to know the truth, since Rama will not accept the pregnancy news well. Kartik asks her to be with Gayu and help her out. She thanks him to be so understanding.

Mansi gets angered with Purushottam asks her to join them for the family pictures. Mansi refuses to him. She tells Ila that she doesn’t want to hurt anyone, so its better that they don’t talk. Ila wants to know the problem bothering Mansi. Mansi asks Ila to leave her alone. She gets rude because of Purushottam. Kartik apologizes to Purushottam on Mansi’s behalf. Naira asks Mansi if there is something she wants to share with her, what’s troubling her so much. Mansi doesn’t tell her anything.

Naira is sure that Mansi is hiding some big problem. Naira takes the girls with her to perform dance. Kartik dances with Naira. Purushottam gets an opportunity to disrupt their moment. Mansi finds his evilness when he tries to inappropriately touch Naira. Naira gets alert of his intentions. She feels discomfort. On the other hand, Vivaan refuses to marry Gayu. This comes as a huge shocker for Gayu, Naira and Kartik.