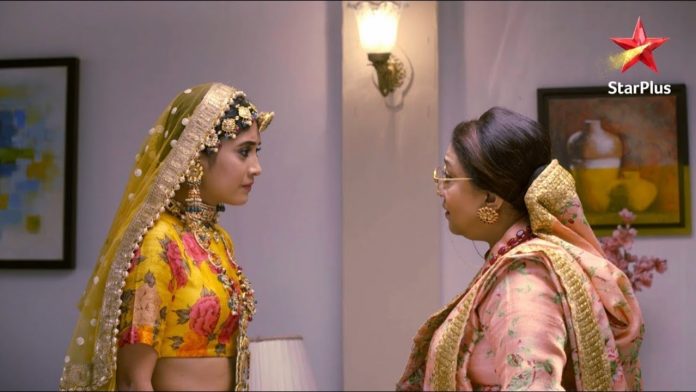 Kasautii Yeh Rishta Twists. Prerna finally gets the papers from Komolika’s room. Anurag learns that Prerna has come home in disguise of the IT officer. He hugs Prerna and teases her jokingly. He wants her to admit that she is Prerna. He tells her that she is looking a cute Sardar. He is proud of Prerna for teaching a good lesson to Komolika. Prerna has also given a good reply to Mohini. She doesn’t want Mohini to fall into Komolika’s trap. She knows Komolika isn’t good to anyone in reality. Anurag doesn’t want Komolika to win, but he is scared of her temper that she can do anything against Prerna. Komolika’s plan to nullify Prerna and Anurag’s marriage has failed. Prerna tells Mohini and Nivedita that they can never oust her from the house. Komolika doesn’t get the papers in her locker. Prerna reveals how she has got the original papers and destroyed.

Everyone is worried for Gayu’s future. Naira assures her that none can harm her baby. She wants Gayu to just think of her baby. Rama is happy when Gayu accepts Samarth’s proposal. Rama hides Gayu’s pregnancy from everyone. Samarth knows about her situation. Naira wants to tell Dadi about Gayu’s truth so that nothing goes wrong later. She tells Rama that they should tell the truth so that no one blames Gayu later.

Rama tells them that Samarth hasn’t taken the decision rashly, he isn’t a kid, he would have thought of everything before. She says we didn’t force anyone for this relation, Samarth has asked for Gayu’s hand, don’t make Gayu’s life more tough. Naira tells her that they shouldn’t keep anyone in darkness. Dadi realizes that Kartik and Naira are hiding something. Dadi wants Samarth and Gayu to marry by all the rituals. Samarth wants to hurry up and marry Gayu. Samarth tells Dadi that arrangements can’t be made in less time, so marriage should be simple.

Dadi wants to keep the marriage after a month, but only with all the rituals. Samarth doesn’t want Goenkas to taunt Gayu about the pregnancy and prefers to hide it. On the other hand, Naira takes a big step to expose Purushottam, while Dadi presents a shocker for her. Dadi reveals that she already knew Purushottam’s truth and couldn’t help Mansi. She had covered up the past for the family peace. She asks Naira to forget and forgive, while Naira decides to expose Purushottam in front of the family.