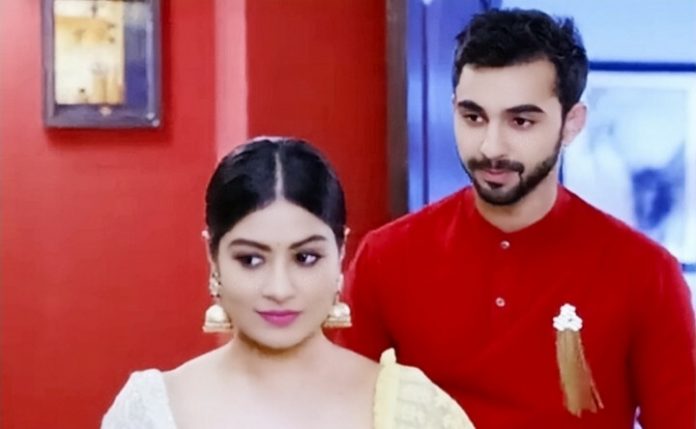 Yeh Hai Mohabbaten Aaliya and Ruhi stay captive. Raman and Bala are happy that Yug’s plan worked to trick Sahil. Mani tells them that he has already spoken to the police team and they will be there soon. Raman doesn’t think Sahil will harm Ruhi and Aaliya. He hopes for the best. Doctor informs Raman about Aaliya’s mental stress. He asks Raman to stop giving the medicines to Aaliya, which can make her violent. Raman asks the doctor why didn’t he tell about the side effects before. Doctor apologizes to him for the carelessness. Raman feels Aaliya’s life can fall in trouble. He asks Mani to take him to Aaliya soon, since she can get hyper and it can affect her mental condition badly. Karan takes a disguise to meet Ruhi and Aaliya.

He tells Sahil’s goons that he is the buyer, he has come to see the new girls. Sahil’s goon doubts on him. He snatches Karan’s phone. He learns about Karan and takes him at gunpoint. Ruhi begs the lady to help her. The lady fears that those goons will kill her. Ruhi wants to save herself and Aaliya somehow. She wishes some miracle happens. She wants Raman to save her in time. Aaliya gets conscious and learns about the huge troubles. She tells Ruhi that she won’t leave her alone. She gets violent knowing the goons’ plans to sell Ruhi.

Ruhi gets a huge shock on seeing Karan at gunpoint. Aaliya makes a violent attack on the goons, getting into a hyper state. Aaliya, Ruhi and Karan try hard to save themselves. The goons shoot Karan in an attempt to kill them. Raman seeks police’s help to find his daughters. Yug tells them that they can track Karan and know about his location. They don’t find anyone in the hideout. They realize that the goons have already shifted Ruhi and Aaliya, and also abducted Karan. Raman gets worried. He gets to see Sahil’s aide. He hears his conversation with Sahil. He realizes that Aaliya has attacked on the goon. He is sure that Aaliya and Ruhi are safe. He alerts the police and wants to find them. The goons continue to trouble Ruhi.

Aaliya reprimands the goon and asks her to leave Karan. She doesn’t come in the goon’s control. She provokes him to shoot her. Ruhi stops Aaliya’s madness. She tells Aaliya that Raman will soon come to save them. The goon tells them that they have to go for the auction. Raman reaches the new hideout. Yug waits for Karan. They don’t know that Karan has been shot. Ruhi agrees to go with the goons to save Aaliya and Karan. Ruhi gets helpless. Ishita senses the trouble on the family. Simmi lies to Ishita that everything is under control. The family misleads Ishita. They feel bad to lie to Ishita. Karan gets beaten up further, while Ruhi tries to get free. Raman doesn’t wait for any longer. Raman hears Ruhi’s screams.

Raman, Mani and Yug barge into the place to nab the culprits and save the girls. Police arrests the goons. The goon threatens to kill Ruhi. Yug manages to save her. Sahil learns that his plan is working fine. He is sure that Raman will try to find his daughters. He asks his goon not to be a fool and keep an eye on Raman. He has no idea that Ishita is in London. Raman asks Yug to take Ruhi and Aaliya with him. The police cleverly lays a trap to catch Sahil’s aides. Raman rescues his daughters. He learns about Karan’s injury. He wants to meet Sahil and clear his misunderstanding. He doesn’t want to spare Sahil. He tells inspector that he will give a statement against Sahil to get him arrested. He wants his family to be secured.

He sends Karan to the hospital. Simmi learns about Sahil’s aides trying to get information about Ishita. She lies to the person who comes to check on Ishita. She alerts the family about Sahil’s revenge trap. The family gets a relief that Raman has saved Ruhi and Aaliya. Karan falls in love with Ruhi, while Rohan gets against their love. Rohan turns bitter towards Bhallas, and want Karan to exact revenge on them by using Ruhi. Karan can’t believe Rohan’s heartbroken bitterness and regrets his mistakes.