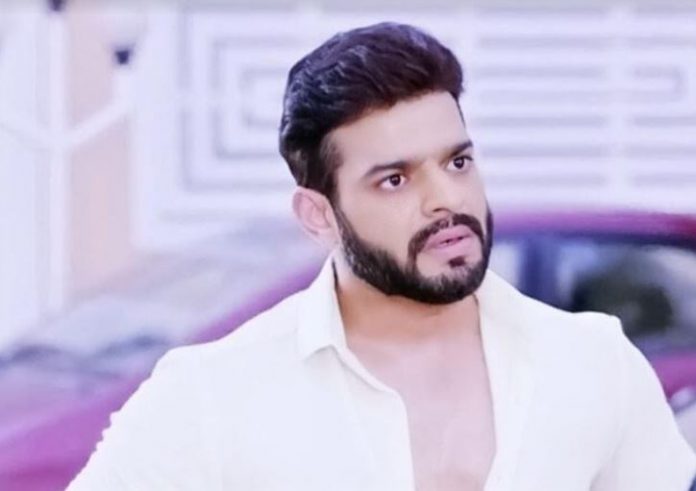 Yeh Hai Mohabbaten Raman is curious to confront Sahil. Sahil learns that Raman had rescued his daughters by fooling the goons. He knows that police will soon arrive to question him. Sahil asks his goons to just go as per their plan. He gets prepared to face the police. He doesn’t want to spare Raman. Sahil asks the inspector to have a drink with him. Inspector accuses him for kidnapping Raman’s daughters. Raman and Yug arrive there and accuse Sahil for Ruhi and Aaliya’s kidnapping. Sahil denies to know anything. He denies the accusations. Raman tells inspector that Sahil is taking revenge for Muskaan’s death.

Sahil shocks Raman to the core by revealing that Muskaan isn’t dead, she is very much alive. Raman can’t believe this, since Sahil had been seeking revenge for her death. Sahil lies to the police that Muskaan is in rehabilitation centre for her treatment. He provides the fake documents. Raman checks the records for his satisfaction. Inspector tells Raman that Sahil has no motive for exacting revenge. Sahil proves Raman wrong. He asks Raman if he has gone mad. Raman tells them that Sahil had come to his home to declare his revenge ire. Sahil proves that he didn’t visit the Bhallas. Police gets convinced that Sahil isn’t involved in the crime. Inspector apologizes to Sahil.

Bhallas discuss about Sahil’s big lie that Muskaan is alive. Raman is sure that Sahil is misleading the police to get saved. He doesn’t want Ishita to know anything. The family worries for Ruhi and Aaliya’s trauma. Sahil is angry that both of them went free. Sahil doesn’t want any police attention, but he can’t stay calm until he fulfills the revenge. He isn’t scared of anyone. He cries for Muskaan’s death. Bhallas get thankful to Karan for saving them. He tells them that Karan is changed and he can trust him now. Yug doesn’t want Raman to trust Karan. Raman comments on Yug’s deceiving ways. He insults Yug for cheating the family by joining hands with Karan. Sahil wants to find the real murderer so that he can take revenge well. Ruhi takes care of Karan. Karan is also worried for her. Ruhi tells Karan that she will drop him home.

Karan reaches his home. Ruhi tells Malhotra about Karan’s injury. Malhotra is worried for Sudha’s reaction. Karan asks him not to tell anything to Sudha. He wants Sudha to get treated well. Malhotra tells Karan that he has got Rohan home. Bala visits Karan to take his welfare. Ruhi gets concerned for Karan. She thanks him for saving her life. She feels she will always be indebted to him. Karan changes his heart towards her. He is also thankful to her for reviving the human in him. Raman tells the family that Ishita will be receiving the award, and then coming back soon. They want to appear happy when they talk to Ishita. Raman learns about the new problem at the office. He wonders about sudden workers strike.

He feels maybe Sahil is behind this. Karan and Rohan become each other’s strength in pain. They badly miss Sudha. Rohan leaves drinking and gets caring for Karan. He feels sorry to misunderstand Karan before. He thinks he wasn’t able to save him from the goons, because of his madness. He tells Karan that he is affected by Aaliya and Bhallas’ betrayal. He asks Karan not to believe Bhallas. Rohan feels he has done a lot for Aaliya, and even then Aaliya chose Yug. He feels Aaliya had used him as a backup and when she got her Adi back in Yug, she left him without valuing their marriage. Karan tells him that Aaliya isn’t mentally fine. He asks Rohan to think how Ishita and Simmi favor him. Rohan doesn’t think Ishita is genuine. Karan tells him that Bhallas aren’t so bad. He feels Raman saved him from goons, and even Ruhi cared for him.

Karan falls for Ruhi. Rohan asks him if Ruhi has fallen in love with him. He thinks its really good if this is true. He asks Karan to plan a love drama with Ruhi to take revenge on Bhallas. Karan wants to tell Rohan that he planted Yug in Aaliya’s life with a motive. Rohan wants Karan to take revenge and not spare anyone. Karan asks Rohan why did he become so negative. Rohan asks him to become selfish. Karan asks him to stop the game of betrayal. He wants to end the revenge between two families. Rohan doesn’t want to forgive Bhallas and Aaliya. Rohan asks Karan to promise him that he will cheat Ruhi. Karan feels he has lost Rohan forever. He realizes his mistake and swears to not hurt Ruhi again.