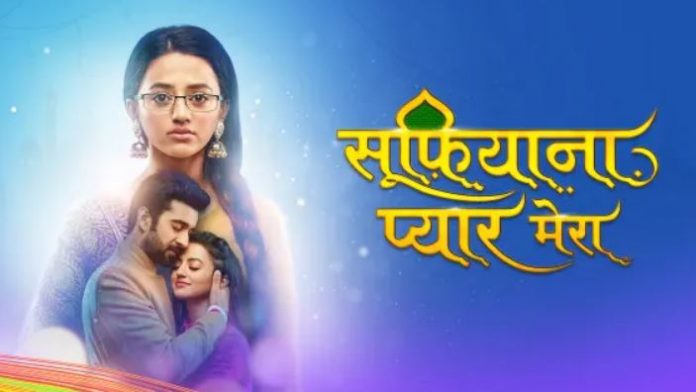 Sufiyana Pyaar Mera Udaan Aapke Aa Jane Se: Sahil acts to be distant from Vedika’s heart in front of the family, to mislead Shitij and Arya. Sahil secretly goes to meet Vedika. He tells her that she should forget everything and focu on her goals of reforming Arya. He gives her strength. Vedika feels lucky to get a life partner like him and thanks him for all the support. They have a moment of togetherness. They love each other a lot. He apologizes to her for his plan to oust her from the house. She understands him. They don’t give up their battle with Shitij. They are strong and hopeful to win back Arya. Sahil plans to expose Shitij’s truth to Arya.

Sitara: Albeli gets drunk and is going to fail Vrinda’s plan. Vrinda slaps her. She doesn’t want Albeli to make any mistakes. Vrinda tells Albeli that it was her plan to add alcohol in Amrit. She is angry that Albeli had drunk the Amrit unknowingly. Vrinda asks Surili to keep Viraj away from Sitara. Vrinda’s truth comes in front of the family. Albelu blurts out everything in drunken state. Rani Maa believes in Sitara, after learning Vrinda’s truth. Vrinda wants to get the game in her favor at any cost.

Udaan: Bhanu kidnaps Sameer and Anjor. Chakor gets a huge shock seeing two lives in grave danger. Sameer fails to save Anjor. He also falls in Bhanu’s trap. Bhanu wants to kill them to punish them for their lie. He captures them in a cave. He is sure that no one will dare to save them. Chakor tries to break into the cave door and save Sameer and Anjor. She struggles to reach them.

NRI Zaroon lands in Ajmer to get married to a relative’s daughter. Zaroon dislikes the girl at first. He thinks of meeting the girl and reject her personally, only to keep the heart of his dad, who had fixed his alliance. He comes across the love of his life, Saltanat. He falls in love at first sight with her. He gets mistaken that Saltanat’s proposal had come for him. He gets overjoyed that she is his soul mate. He thinks of giving his nod for marriage. Zaroon doesn’t know that he had received Kainat’s marriage proposal.

Kainat and Saltanat resemble in looks, but are cousin sisters. Zaroon’s misunderstanding grows. He gives his approval for marriage. The families think he is going to marry Kainat, while he dreams of marrying Saltanat. Zaroon befriends Saltanat, while hiding his real identity to know her more. Saltanat doesn’t love him, and puts him in friends zone. Zaroon proposes Saltanat for marriage, to which she refuses. He takes it as a challenge to win her love.

Kulfi Kumar Bajewala:
Sikandar falls helpless because of Amyra again. Amyra calls the police there to get Kulfi and the kids arrested. Amyra wants Kulfi out of the competition to get a clear cut victory. Amyra wants to keep Sikandar away from Kulfi. He feels unfortunate to bear the separation with Kulfi. He apologizes to Kulfi. Amyra creates troubles for Kulfi by exposing her truth on the stage. She unmasks Kulfi while singing the duet and reveals that she is a criminal on loose.

The crowd gets angry on Kulfi and scold her. Sikandar tries to calm down the crowd, while the kids support Kulfi. Sikandar thinks of helping Kulfi. He sends someone to get Kulfi released from the remand home authorities. A person meets Amma ji and gets Kulfi and other kids released. Kulfi finally gets her freedom, all thanks to Sikandar. He can’t let anything happen to her and proves his love for her. Sikandar fails Amyra’s plans.