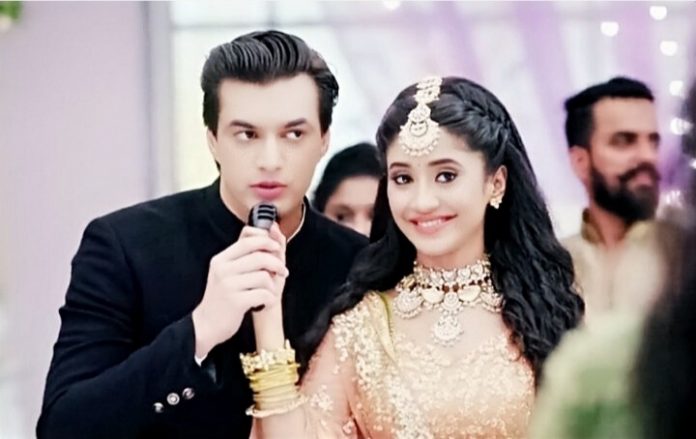 Confession twist in Yeh Rishta Kya Kehlata Hai. Kartik and Naira meet Mansi and try to encourage her to get justice. They don’t want Mansi to get scared of any consequences. Kartik asks her not to take tension about Anmol or Rukmani. He assures that her in-laws will understand her and not blame her for the past, since she was a victim. Kartik wants Purushottam to get punished at any cost, so that the evil doer’s courage breaks down. He asks Mansi not to let go the criminal so easily. Kartik wants Mansi to speak up. Mansi stays in fear that Anmol won’t be able to understand the matter. Naira tells Mansi that they will talk to Anmol and explain him. Kartik and Naira ask Mansi to help them in exposing Purushottam. Mansi finally agrees to them.

The families gather to celebrate in a masquerade party. Naira plans to expose Purushottam’s truth to the family. They organize the masquerade party just to unmask Puru. The family gets funny moments because of Rukmani. Rukmani expresses her thoughts about Goenkas, which doesn’t go well with Manish and Dadi. Rukmani apologizes.

Naira warns Purushottam that she has got the evidence against him and now she will expose him. She lays a trap for him by instilling fear in him that he will soon get exposed in front of everyone. Purushottam goes to threaten Naira, unaware that Kartik knows Naira’s plan and is following him. Purushottam tries to act smart and get saved. He has no idea that the family is hearing their conversation on the speakers.

Purushottam is sure that she has no proper evidence and she is just shooting in darkness to make a point. He tells her that he isn’t scared of her. Naira tells him that he has all the evil courage to execute his plans, but now she will show her good courage to expose him. She asks him to get prepared to answer everyone about his past and present crimes. He gets worried that Naira will be breaking down his good image in Goenka family. He doesn’t want this to happen. He wishes to get some help.

Naira asks him to better make a crime confession before she unmasks him. She tells him the dire consequences after he is exposed. Kartik waits for Naira, so that he can play Purushottam’s confession in the party. Purushottam plays smart and gets lying to Naira. The family doesn’t learn his truth. Purushottam fools Naira and Kartik. He speaks about Ila’s project. He admits that he bribed some officials to get the project approved so that he can fulfill Ila’s project. He presents himself as a noble man, who haven’t done anything wrong in the past. He tells Naira that his one mistake to bribe the official is not letting him live in peace. He wants to repent for his mistakes. He shocks Naira by changing the game entirely.

Ila gets emotional knowing her father’s big move to complete her dream. She feels he is the best father and he can never be wrong. Purushottam wins it again. Kartik believes Naira that Purushottam is cleanly lying. He wants to make another plan to expose Purushottam completely.