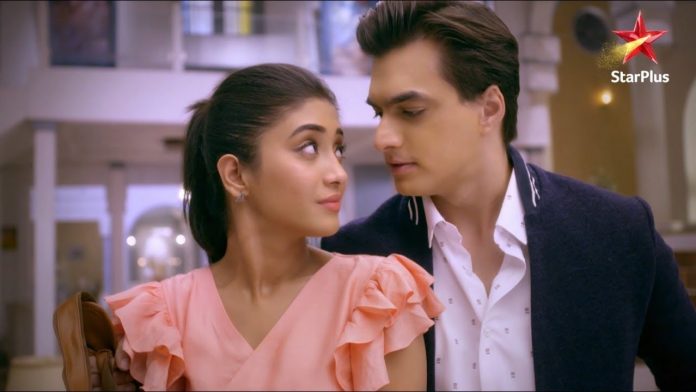 YRKKH Muskaan Unexpected twists. Kajal plans to get Muskaan killed during a school play. They give a social message to preserve the national animal, tigers. Gayatri becomes the hunter, while the other family members become trees and animals. Kajal instructs Gayatri to shoot Muskaan while acting in the play. She tells her that the gun will have real bullets. Gayatri gets helpless and shoots Muskaan. Ronak gets shocked when he sees Muskaan fallen dead. Muskaan is alive, since she had swapped the bullets. She has learnt Kajal’s evil plan and protected herself from the attack. Ronak rushes Muskaan to the hospital. Kajal thinks Muskaan is dead. Muskaan knows Gayatri is Kajal’s puppet. Muskaan will reveal the dangerous threat to Kajal.

Dadi reaches Manish and wants to know what happened to him. Kartik tells Dadi that Manish suffered a heart attack. She feels ashamed that Purushottam has ruined them. The family hates Purushottam more. Kartik feels pressured to handle everything in Manish’s absence. He doesn’t know how to answer the investors. Naira finds Kartik facing much troubles. Naia learns about another big issue at the office.

The investors demand their money back. Naira makes a promise to the investors that the project won’t get stalled and they will get their invested money with profits.

Naira gets ready to enter the corporate world to help out Goenkas. Kartik feels proud of her like always. He wishes her all the best and takes her to Goenka office. Dadi fears that Kartik’s ego will come between their relation, and maybe he won’t be able to accept her success stride. She worries for Kartik and Naira’s relation going to face huge problems in the future with Naira’s move.

Sufiyana Pyaar Mera: Zaroon refuses to marry Kainat since he is in love with Saltanat. Kainat gets heartbroken and still shows courage to accept the rejection. Kainat blames Saltanat for snatching her love once again. Kainat gets away from the family for a while and sheds tears. Saltanat feels Zaroon has done wrong with Kainat. Zaroon gets a huge shock when Saltanat refuses to marry him. He asks her the reason. Saltanat scolds him for rejecting her sister. Rubina asks her not to forget her limits and have shame.

Saltanat tells them that even she has a right like men to accept and refuse an alliance. She takes a strong stand against Zaroon. She firmly states her thoughts against Zaroon’s move. She is deeply hurt that Zaroon has broken Kainat’s heart. Rubina doesn’t want Saltanat to refuse to Zaroon. She wants Saltanat and Zaroon to get married.

Kasautii Zindagii Kay:
Komolika, Nivedita and Mohini come up with a drama to kick out Prerna. They don’t want Prerna in the family. They bear Prerna only to calm the problems in front of Tapur’s would be inlaws. Prerna gets the tilak plate and tells everyone that she is the bahu of the house. Komolika gets angry when Nivedita takes Prerna’s side in front of guests. She doesn’t want people to talk more about their family. She asks Komolika not to worry. Mohini gets miffed with Nivedita.