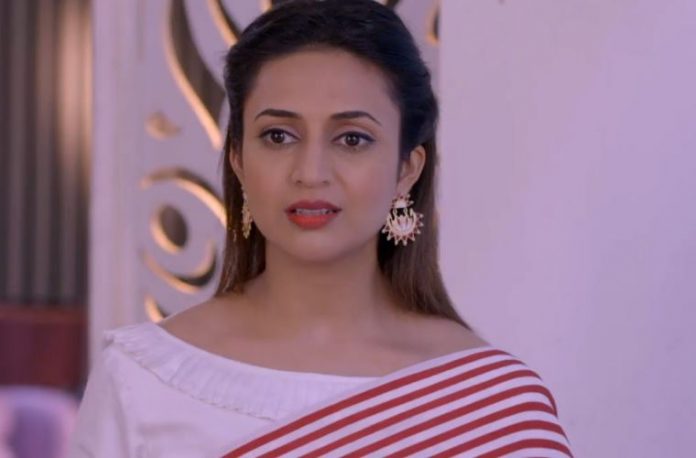 Yeh Hai Mohabbatein Terrible threat. Ishita breaks the truth to Raman and sheds tears. She tells Raman that she has become Sahil’s puppet just to save Ruhi. She is scared of Sahil’s threatening. She doesn’t want Ruhi to fall in danger. She doesn’t know why Sahil wants to prove her two identities of Shaina and Ishita. She feels sorry that she is doing all the illegal things on Sahil’s orders. All of the truth revelation is part of Ishita’s dream. She fails to tell anything to Raman. Raman has removed many cameras from the house, but still Sahil has planted hidden cameras to keep a watch on Ishita. She wishes that she could tell the truth to Raman.

She feels helpless and thinks to protect her family. She doesn’t want anything to happen to Raman and family. She is ready to do anything to save Ruhi’s future. She makes the breakfast for everyone and acts normal like Ishita. Sahil watches her on the footage and messages her to meet him. She tells Raman that she has to rush to her clinic. Raman is still confused whether she is Ishita or Shaina. Simmi tells him that Ishita is behaving normal and good, it means she is Ishita. Shamshad meets Ishita and hands over a drugs box to her. He asks her to keep it safely until she gets Sahil’s orders. Ishita wonders what’s the contents of the box.

She checks and finds some powder in it. She wants to find what is the powder, whether drugs or something else. Raman meets Ishita at her clinic to give her coat. He misses to see Sahil and Shamshad. He goes to have lunch with Ishita. He meets Ishita and finds the strange parcel. She doesn’t let him check it. She tells him that she is busy and can’t go for lunch with him now. She wants to get the powder tested secretly so that she knows about it. She meets Rohan and asks him if there is any CCTV camera around. Rohan asks her not to worry and share her problems. She is tensed and asks him to get the powder sample tested in some trustworthy lab so that the reports can be kept discrete. She asks him to let her know about the chemical powder.

She wants to know the results soon. She takes his help. He is ready to help her since she has always supported her. Someone threatens Yug for his past. The man puts Aaliya in danger. A ceiling fan falls over her, but Ruhi saves her in time. Ruhi and Aaliya get hurt. Yug gets worried for Aaliya, knowing the blackmailing is doing everything. The man threatens Yug to ruin him if he doesn’t come to meet. Yug loves Aaliya and is relieved that she got saved. He is worried to know who has returned from his past to haunt him.

Aaliya is much scared and finds peace with her Adi. Simmi thinks Yug has plotted all this to win Aaliya’s heart and sympathy, so that when she recovers, she doesn’t leave him. She tells Raman that she suspects Yug for planning such odd things to impress Aaliya. Raman doesn’t think that Yug can put Aaliya in danger. Simmi tells Raman that Yug is doing everything to impress Aaliya. Raman feels Yug loves Aaliya and will never harm her, but still he should keep an eye on Yug. He wants to know Yug’s truth, on finding Yug worried while checking his phone.

Rohan gets the dangerous powder tested and learns the big threat on Ishita. The doctor tells Rohan that the powder is really dangerous and they should better stay away from it. Sahil wants to trap Ishita and take revenge on her entire family, since he is fulfilling Muskaan’s last wish. He tells Shamshad that Ishita will never know his plans and get trapped, she won’t be able to save Ruhi and get her entire family in danger.