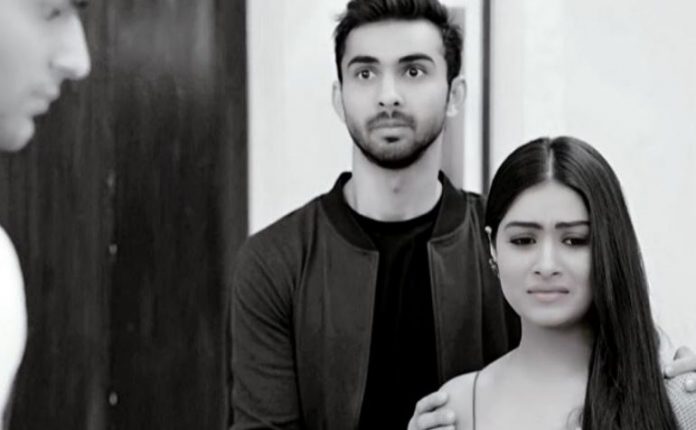 Yeh Hai Mohabbatein Horrific trauma twist. Yug tells the Bhallas family about Rohan’s molestation move to harm Aaliya. The family can’t believe Rohan’s creepy move. Aaliya cries recalling the incident. Ishita asks Rohan how could he do such a cheap act. She slaps him and regrets for believing him. She asks Rohan not to come to them again. She feels Rohan doesn’t deserve any chance. Rohan tells Karan that he had come to meet Ishita for some work. Ishita doesn’t want Rohan to tell about it in front of everyone. Yug asks Rohan to get lost. Ishita asks Karan to take away Rohan before anything happens. Rohan reveals Yug’s truth to Aaliya. He scolds Yug for cheating Aaliya by taking up Adi’s identity. He exposes Yug’s truth to Aaliya without caring for her mental state, since Yug is taking advantage of Aaliya’s illness. He feels its time that Aaliya knows the truth for once and all.

Aaliya can’t believe Rohan’s words. Rohan tells her that he is ashamed to misbehave with her, but her family has cheated him to get his signs on the divorce papers. Yug tells Rohan that Karan is the one who has got him divorced with the help of Raman. Rohan confronts Karan for getting the papers signed by him with a trick. He slaps Karan on knowing about Karan’s misdeed. He feels sorry that Sudha and Karan cheated him, and even Bhallas cheated him for long. He feels lost in life since no relation in his life was true to him.

Rohan questions Aaliya for signing the papers by believing Yug. He reminds Aaliya their love vows. He tells her the big truth that Yug isn’t Adi, he just resembles Adi. He reminds how Adi died by Ishita’s hands and Bhallas conducted his final rites. He asks Aaliya how can she believe that Adi can come back from the dead. He asks Aaliya to control her thinking and mind. He tells her that the entire family knows about her weak mental state. He asks her to face the truth, Yug isn’t Adi and its just her mental instability, but she can’t believe this all life. Aaliya denies to believe Rohan. Ishita fears for Aaliya’s state and asks Rohan to leave.

Rohan wants Aaliya to come out of her illusion. Yug does not want Rohan to hurt Aaliya. Rohan accuses him for harming Aaliya by coming into their lives and breaking his marriage. Yug accepts that he isn’t Adi. He tells Aaliya that he fell in love with her, but backed off knowing she is Rohan’s wife, but Karan helped him in breaking Rohan and her marriage. He apologizes to her. He admits that it was his love for her which made him do all this. Aaliya feels shattered knowing Yug isn’t her Adi. Bhallas ask Rohan to leave Aaliya and just go away for a while. Aaliya finds hard to manage the truth. Rohan vents anger on Karan for mocking his life and happiness, knowing he loves Aaliya a lot. Karan regret for ruining Rohan’s life.

Rohan tells Karan that he changed because of Aaliya’s love, but now he feels cheated. Bhallas are worried for Aaliya and wait for her awakening. Aaliya reacts in anger when she wakes up and sees Yug. She accepts that Adi is dead and Yug can never be Adi. She doesn’t want to talk to anyone, knowing they all have cheated her. Ishita gets scared for Aaliya and shares her tensions with Raman. Karan worries when Rohan packs his bags to leave the house. Rohan tells him that his heart is shattered with Karan’s deceive. Karan apologizes to him. Rohan doesn’t believe Karan.

Karan tells him that he didn’t intend to hurt him. Rohan can’t believe that Karan has planted an imposter in Aaliya’s life. Karan apologizes to him and asks him to forgive him for the last time, at least for their old bonding and Sudha’s health condition. He loves Rohan a lot and can’t see Rohan leaving away. Bhallas stay upset and want to be with Aaliya. Aaliya misses Adi and recalls his death. She comes back to her senses. Bhallas want to know if Aaliya is fine. Aaliya spends time alone and cries a lot. She gets violent. Ishita shares Aaliya’s emotional trauma with her doctor. She wants to reach Aaliya and calm her down. They don’t want Aaliya to hurt herself. Bhallas find Aaliya in a fragile moment, while Aaliya vents her anger and pain.

Ishita tells the doctor that Aaliya’s state is getting worse. Doctor tells her that Aaliya should vent her frustration and may come out of trauma soon, while accepting the reality. He asks Ishita to bring Yug and Aaliya face to face, so that Aaliya doesn’t fall into any illusion again.