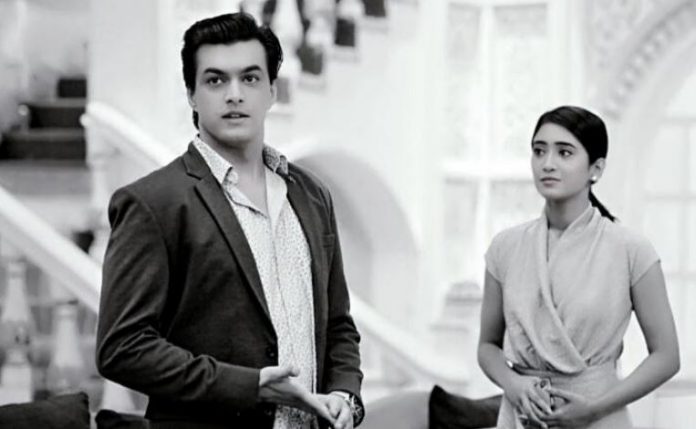 Yeh Rishta Kartik Major decision. Dadi is worried that Naira isn’t staying back in the house when the ladies are making news of Gayu’s pregnancy. Naira tells Dadi that she has to leave for the work meeting, she has stayed back for Gayu’s sake. She asks Dadi why did she keep the Mu dikhai rituals suddenly without informing anyone before, the preparations would have happened well if Dadi told this to them. She doubts that Dadi has intentionally created hurdles for her. Kartik rings the fire alarm for Naira’s sake to buy some time. He wants Naira to come soon for the meeting. The clients get worried because of the alarm and rush out of the hotel. Kartik awaits Naira. Dadi asks Naira to do her duties towards the family.

Naira is sure that she is fulfilling her duties well. She tells Dadi that she can manage both work and family. The clients tell Mihir that they will have the meeting the next day. Mihir is upset that Naira didn’t turn up. The clients leave. Naira reaches there and apologizes to him for being late. Kartik asks Naira why didn’t she come on time. Naira tells him that she will tell him everything once she apologizes to Mihir. Kartik hugs her and asks her to convince Mihir.

Naira accepts her mistake and tells Mihir that she won’t be unprofessional next time. She asks him to fire her if he wants. Mihir is impressed that she has not made any excuses. He tells her that he will fire her when he learns that she won’t be able to do the work on time. He gives her double work. He asks her to make dual designs for the jewellery. He wants all the inputs to be unique. Naira agrees to work with him. She feels she should rectify her mistake. She messages Kartik to inform that she will be late. Mihir takes her phone so that she doesn’t get distracted. Kartik calls Naira and reaches Mihir’s office.

He finds Naira inside the office, working late. He gets angry that she isn’t safe. He sees Mihir and confronts him about putting Naira’s safety in risk. Mihir dislikes his words and asks why is he sending his wife to work. Kartik tells Mihir that he won’t let Naira work with him. He summons Naira and asks her to leave the job. Mihir asks her to pick her designs and just leave. Naira learns about their argument. She refuses to leave. She tells Kartik that she has chosen this job and wants to continue.

Meanwhile, Gayu apologizes to Dadi for whatever happened. She finds Dadi annoyed with Naira. Samarth tells Gayu that Kartik will handle everything, Dadi and Naira’s relation won’t get spoiled. Kartik takes Naira home. He finds her upset and cheers her up by an icecream treat. Naira tells him that he has decided for her and now she has nothing to say. She doesn’t want Kartik to feel guilty. He tells her that her safety matters the most to him. Mihir angrily trashes Naira’s designs. He gets amazed seeing her talents and regrets that he fired her from the job.

He shares the matter with his lover Mitali. Everyone is worried knowing Naira has lost the job. Dadi asks Naira to work with Goenkas. She is happy that Naira won’t work with Mihir. Naira sheds tears and feels lost. Kartik finds her crying and apologizes to Mihir. He asks Mihir to give another chance to Naira. He vows to support Naira and stand by her under any circumstances. Mihir agrees to work with Naira again, believing in her talent.