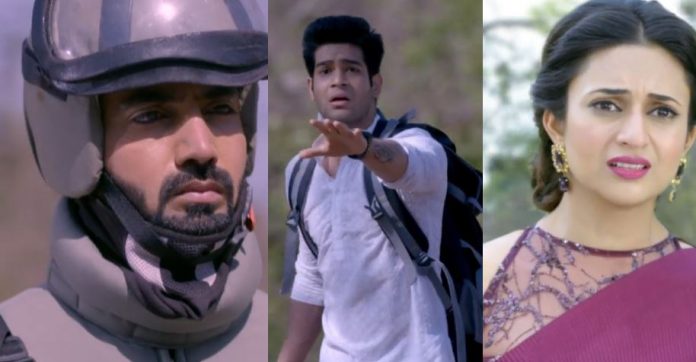 Yeh Hai Mohabbatein Shock Twist. Sahil informs Ishita that Rohan won’t be able to harm him, since Raman will fail to give evidence to police any how. He tells her that Rohan will die if he chooses to die by opposing him. She tells him that she will get the evidence from Raman, to save Rohan’s life. Sahil gives her time to save Rohan. Sahil is sure that Raman learnt about the threat and now Ishita will convince him. Sahil learns that Raman didn’t step inside the police station yet. Mani and Bala ask Raman to meet the inspector and give the evidence. Ishita calls Raman and warns him against going to police, since Rohan is in huge danger. She tells him about Rohan carrying the explosives, planted by Sahil. Raman can’t believe this.

Ishita tells Raman that they have to rush and save Rohan first. Sahil gets the good news that Raman didn’t go to the police station. He asks his men to follow Raman and Ishita. The family waits for Raman and others, so that Aaliya and Yug don’t get suspicious. Bala asks them how is Sahil getting all the news from him. He tells them that they should get back home. Karan wants to save Rohan at any cost. Karan calls Rohan and asks him his location. Rohan knows that he won’t be able to talk to Karan again. He chooses to die, and asks them to go to police station with evidences against Sahil.

He asks Raman and Ishita to think of Ruhi and save her from the huge ugly mess. He wants them to be with the family, who needs them a lot. Ishita wants to save Rohan too. Rohan tells them that maybe this was meant to happen. Mani tells Rohan that he will get the bomb squad to save him. Karan loses courage knowing the big threat on his elder brother. Manish informs Sahil that Raman and Karan are still trying to save Rohan. Sahil gets angered that they are still double crossing him. He wants Raman to bear the punishment.

Rohan reaches a far off place and recalls the special relations he cherishes in his life. He gets a sinking heart and worries, while accepting his fate. Mani and Bala come back home to cover up Raman and Ishita’s absence. Bhallas are upset that Raman and Ishita are being so careless and are not present in Aaliya’s marriage. Bala tells Simmi that Sahil can still watch them. He alerts her about Sahil. Simmi wishes that Raman and Ishita stay safe. Raman, Ishita and Karan reach Rohan to help them. Rohan doesn’t want anything to happen to them. He knows that they can’t save him now. Karan cries for Rohan.

Aaliya and Yug get married. Shagun and Mani carry out the marriage ceremony. Rohan gives Sudha’s responsibilities to Karan before he makes a farewell. Raman and Ishita ask Rohan to have hopes, he will get saved. Mani stays stressed about Rohan, who is ready to give his life for them. Bala makes a video call to see Rohan’s rescue mission going on life. The bomb squad official doesn’t help Raman. Rohan learns about Sahil, who takes a disguise to push him towards death. Sahil just wastes the time and makes sure that Rohan dies.

Rohan can’t believe that Sahil reached him. Sahil tells him that since he has chosen to help Bhallas, he will pay for it and now die in front of Bhallas. Raman and Ishita get helpless and request the police to save Rohan. Sahil prepones the timer and asks Rohan to get ready to die. Rohan accepts the fate, being helpless. Sahil runs away from the sight, while Raman and Karan get suspicious of him. They watch Rohan dying and get a huge shock.