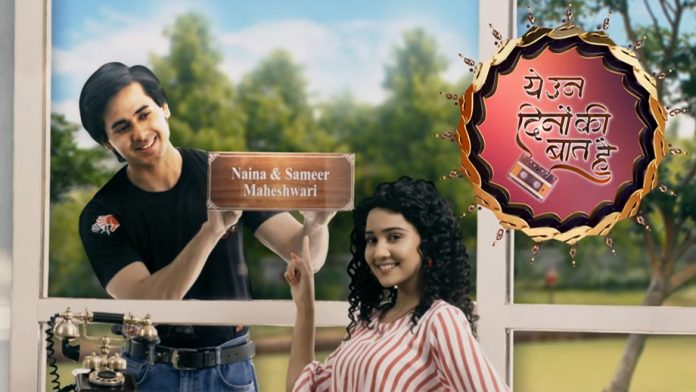 Yeh Un Dinon Raabta Yeh Rishte Hai Pyaar Ke: The society women see Kunal and Mishti’s picture in the newspaper and calls them lovers. They ask Rajshri what name would she give to their relation, why does Mishti want to continue the courtship when she has got close to Kunal. Kuhu feels bad seeing Kunal and Mishti’s picture. She likes Kunal. She doesn’t want Kunal to marry Mishti. Rajshri and Varsha fail to answer the women. They also think to talk to Mishti and make her agree for the marriage, so that the society doesn’t raise any objection. Kunal gets clear of his confusion over Mishti and tells Maheshwaris that he is ready to marry Mishti. He is sure of his mum’s choice. The family wants to know Mishti’s answer.

Abir finally tells Mishti that he loves her. He tells her that he is in love with her and now he won’t let her marry Kunal. He has realized his love for Mishti. Abir’s love confession is actually a dream. He fails to tell anything to Mishti and watches the alliance getting fixed. He wishes that Mishti refuses for marrying Kunal. Abir gets depressed when Mishti also gives her consent for marriage. She is ready to marry Kunal, thinking he has saved her life from the fire.

Tujhse Hai Raabta: Kalyani has saved Malhar’s life and meets with an accident. She loses her eyesight. Malhar gets caring for Kalyani again. They have a moment of romance. He wants to protect Kalyani. He promises to fix everything in her life.

Ishq SubhanAllah: Kabeer and Zara have cute romance while preparing the food for the poor. They got a moment to live together and celebrate their me time. Kabeer’s funny cooking tips make her laugh. They play games in the kitchen and romance. Zara’s dupatta catches fire while she makes fun of Kabeer’s cooking. He saves her from the fire. He asks her to be careful. Zara doesn’t know that the maid had burnt her dupatta and risked her life. Kabeer gets some burns and still thinks of Zara’s pain. He cares for her. The fire incident makes the family worry. Shahbaz and Zeenat plotted this incident. They don’t want Kabeer and Zara to reunite.

Yeh Un Dinon Ki Baat Hai: Sameer and Naina face new problems since Rakesh came to stay with them. Sameer wants to hide his problems from Rakesh. He has a not so good relationship with Rakesh. He knows that Rakesh won’t solve any mess and rather get insulting him for not being able to handle his work. Sameer and Naina enjoy some filmi romance. He tells her that he will always be with her and not let her get hurt. He knows she is struggling with him for his dreams. He is thankful that she is supporting him.

Rakesh creates a scene when he doesn’t find comfort in the room. He tells Sameer that he wants everything as he wants. He asks Sameer to replace the old mattress. Sameer is troubled by his nagging. Naina apologizes to him on Rakesh’s behalf. Naina gets saved from Saas-bahu troubles, while Sameer gets targeted by his Sasur Rakesh. Sameer has to hide the fact that he is married to Naina, so that he becomes a hero.

Aapke Aa Jane Se: Sahil imagines Vedika all the time. He feels she is always close to him. He romances her in his dream. Vedika asks Sahil to take her to Rahul’s house. They meet Rahul and his family to fix Rahul and Geet’s alliance. Vedika convinces Rahul and his family. She gets true to them about Sahil and her marriage, why it happened and how. Rahul likes her honesty and accepts Geet’s alliance. He tells his parents that he will marry Geet. Sahil and Vedika get happy and inform the family that the alliance is on. The family prepares for the engagement. They are thankful to Vedika for fixing the broken alliance. Sahil happily day dreams about Vedika. He wishes to give her a romantic surprise.

Rocky learns Bhatia’s evil plans and rushes to meet him. He bashes up Bhatia and asks him not to hurt his family. He wants to know about Sania. He learns that Sania had planned an attack on Sandhya. He doesn’t want Sania to get more mad and kill anyone. He tells Happy that Sania has tried to kill Sandhya. He is much angry on Sania and Bhatia. He loves Happy’s family as his family. He vents out anger on Bhatia. Happy stops Rocky from the fight. She doesn’t want Rocky to follow any wrong path again. She tells him that she doesn’t want him to go jail.