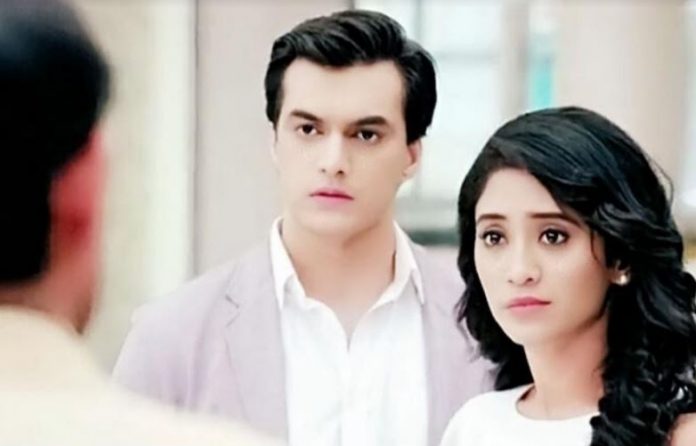 Yeh Rishta Kehlata Pregnancy twist Naira plans a good family time and breakfast in the lawn so that everyone gets a change. Kartik finds everyone happy. He is upset that Manish and Naira are hiding a big matter from him. He feels they both don’t have faith in him now. Naira tells them that she has made everything of Kartik’s choice, which is everyone’s choice. Kartik breaks his silence and asks Manish about the project. Manish asks Naira if she has told him about it. Naira didn’t tell anything to Kartik.

Kartik tells Manish that he has got the mail and learnt about the new deal. He asks Manish how is he handling the project. Manish tells Kartik that he didn’t tell him because of his health condition, he has asked Mihir and Naira to work on it, they have less time to finish the work. Kartik asks him why didn’t he ask him once.

Naira asks Kartik to take the project once he gets fine, until then she will handle it. Kartik asks her not to interrupt him. Manish asks Kartik not to get upset with Naira, it was his decision to sign the deal. Kartik asks Manish if he doesn’t trust him and believes in Mihir more. Mihir joins them for breakfast. Kartik taunts him on his work model, which got him much success. Mihir asks him if he has come on a wrong time.

Manish asks him to have breakfast with them. Kartik angrily leaves. Naira asks Kartik not to feel guilty, Manish has made him away from the work so that he doesn’t get burdened. She explains that they have to think of family and keep their ego aside. He tells her how bad he is feeling that his family is taking Mihir’s help. She asks him to calm down and hugs him. She asks Manish to talk to Kartik once. Manish refuses to explain Kartik. Naira gets busy in work. Surekha and Suwarna watch them working together and praise them. Kartik overhears them and comes to help them.

Naira asks Kartik to join them. Kartik gives his idea. Mihir and Kartik have an argument over the designs. Kartik gets angry and breaks the laptop in his dream. Naira likes Kartik’s ideas. Mihir asks Naira to come to office and make the designs. Naira tells him that she will come later. She feels unwell and takes an appointment with the doctor. She makes a work excuse and goes from the home. She wants to meet the doctor. She lies to Kartik so that he doesn’t worry for her health. She wonders if her clot in brain is recurring.

Kartik finds her laptop in the room. He goes to give the laptop to her. He finds her going somewhere else and follows her. He calls her and asks her about reaching the workshop.

When she lies to him, he gets upset. He doubts about Mihir and Naira. He feels maybe Naira has thought of something and lied. He wonders if she has changed and doesn’t love him anymore. He gets confused and gets suspecting her. He knows she lied to him. He feels he has failed in protecting her and helping her in the project, he has become a loser and maybe that’s why Naira is leaving him. He doesn’t want to become a loser. He recalls Mihir and Naira’s bonding. He gets much hurt.

Naira gets her check up done. Doctor tells her that maybe she is pregnant and some tests have to be done to confirm this. Naira gets happy and wants to give this news to Kartik. She goes to meet Kartik. She senses that her relationship with Kartik is spoiling. Kartik will soon learn about Naira’s pregnancy and get misunderstanding Naira for Mihir and her affair further.