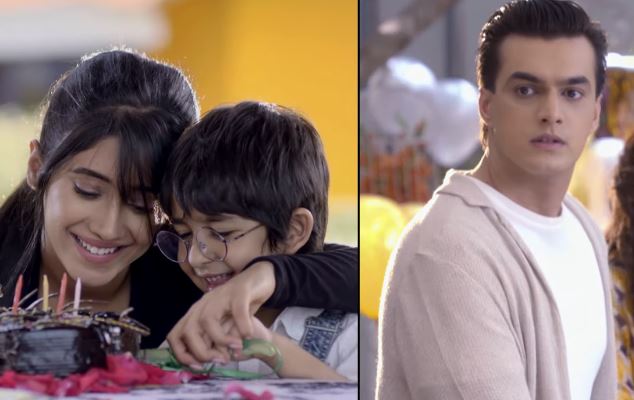 Yeh Rishta Kairav Upcoming Kartik misses Naira a lot and can’t forget her. He cherishes their good memories. He regrets the fact that she has faced death because of him. He can’t forgive himself for her loss. He feels much guilty and hates himself for making Naira away forever. He gets busy in his work and keeps her pictures back. Aarav/Kairav sees the kids being picked by their parents at the school gate. He misses his dad and thinks who is he. Naira tells Kairav that she has made a cake for him. He asks her to make Kachoris for him, since he prefers to eat Kachoris than a cake. Naira gets reminded of Kartik once again. He asks her to make Kachoris and get soon since its his special day and choice should be of him.

Naira tells Kairav that Lisa will finish the cake, he should better have some. He asks her about his dad. She gets crying and eats the cake to make an excuse. She doesn’t know how to tell Kairav about Kartik. She goes aside to shed some tears. She knows Kairav is getting bothered by his father’s absence. On the other hand, Goenkas party and celebrate Vansh’s first day at school. Manish gifts a biker’s jacket to Vansh and surprises him. Everyone likes his cool gift. Kartik and Vansh cut the cake happily. Gayu doesn’t want Vansh to get too pampered.

Vansh is happy with Kartik. The family feels Kartik’s life got balanced by Vansh’s coming. They don’t want to tell anything to Vansh. They just want Kartik to be happy. Vedika asks Gayu about the games for the kids. Gayu tells her that she forgot to get the gifts as well. Vedika tells her that she has arranged the gifts and everything is ready. Gayu thanks her for being a saviour always. Kartik plays with Vansh and his friends. Suwarna misses Naira and wishes that Naira was alive. Vedika tells Suwarna that she loves Kartik. Suwarna knows their relation can’t form. The ladies talk of Kartik and Vedika’s alliance, since Naira is dead.

Kartik gets upset and hides his feelings. He makes a leave from there. He recalls Naira. Kairav tells Naira that he got to know everything about her father. He puts his favorite hero’s photo in the family tree. This makes Naira smile. Kairav longs for his dad. Kartik repents for losing Naira. He gets too emotional. Dadi asks the family to help her in convincing Kartik for marrying Vedika. Suwarna doesn’t want to force Kartik. Manish asks her to help Dadi as its been five years that Kartik has been tackling loneliness.

He feels Kartik and Vedika can complete each other and start a new life. Vedika asks the family not to worry for her, she doesn’t want to fulfill relations without a will. She wants to keep hope. Everyone agrees with her. Naira meets Kartik in her dreams and expresses her love for him. She misses him and calls Goenka house. She hears Kartik and Suwarna’s voice. Suwarna senses that its Naira. Manish consoles her and tells her that Naira is no more. Suwarna can’t believe that Naira has died. Kairav feels bad that Naira is crying. Naira stays stressed about Kairav facing questions about his father. Kairav and Lisa plan to celebrate Naira’s birthday.

Kartik visits Naira’s dance academy. He celebrates her birthday in a unique way. He doesn’t like Vedika’s interference and asks her to get away. His anger calms down and he apologizes. Vedika feels its impossible to separate Naira from Kartik’s heart. She bears his anger and annoyance for no reason. She hopes to find love in Kartik’s heart for herself some day.