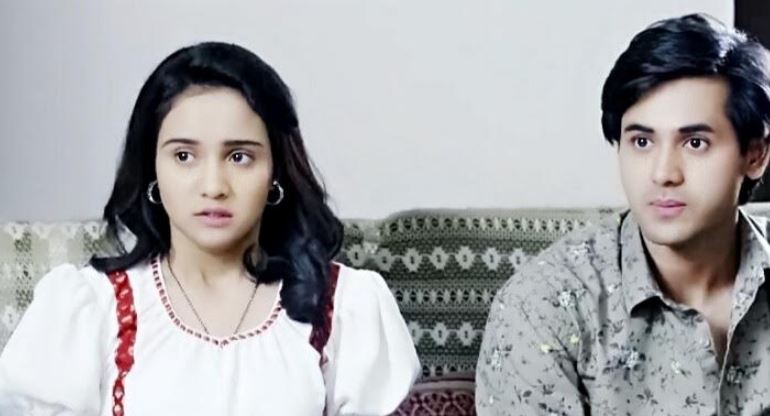 Yeh Un Dinon 21st June 2019 Naina gets worried knowing about her pregnancy and thinks everyone will know that Sameer is married to her and he will not get an acting job. Preeti asks her to message Sameer. Naina decides to tell him when he comes home. Sameer comes home after getting training in acting and doing his work, selling samosas on road hiding his identity. Naina whispers in his ears about her pregnancy. This brings happiness is Sameer and Naina’s lives. They feed sweets to Rakesh while breaking this good news. Rakesh gets too happy and dances with them. Sameer gets much busy in his auditions. He is staying at Preeti’s place.

He is getting less time to spend with Naina. He comes home and meets Naina. He helps Naina in her work. He pays special attention to Naina and stops her from getting burdened from work. He cooks the food for her. They make the most of the moment by their sweet gestures. Naina asks Sameer not to share her work. She wants him to just get successful. They are happy, and not thinking about the consequences of her pregnancy and Sameer’s future.

Jaat Na Poocho Prem Ki: Pujan Pandey tells his family that he has chosen a groom for Suman and has fixed her alliance today. He shows the groom’s picture to them. They like the groom’s picture. Pujan Pandey tells that he will get her married once she returns after completing her education. Suman happily celebrates her birthday with Badal and their friends. Badal wishes her happy birthday. Suman cuts the cake and makes Badal have the cake first.

Udaan: Chakor takes a disguise of Chaya and returns to Ranvijay’s house. Ranvijay permits Chaya to stay with them. Bua sees Chaya and gets reminded of Chakor. She tells him that maybe Chaya is Chakor’s wandering soul. Chakor scares Bua and keeps her away from Anjor. Chakor plans to ruin Ranvijay. Chakor impresses Ranvijay and traps him. Ranvijay wants to marry Chaya. Ranvijay forgets Anjor and gets all his attention on Chaya. Chakor conspires to expose Ranvijay’s evil and free the village from him. Chakor protects Anjor like a strong mother.

Main Bhi Ardhangini: Vaidehi goes to the storeroom and sees Chitra there. Chitra threatens her and tells that today is her wedding night with Madhav and she will unite with him for forever. Vaidehi refuses and is shocked to know Chitra’s motive. Meanwhile, Madhav asks Vaidehi why she is after the storeroom even after knowing the secret. Anuradha tells him about Chitra’s ghost.