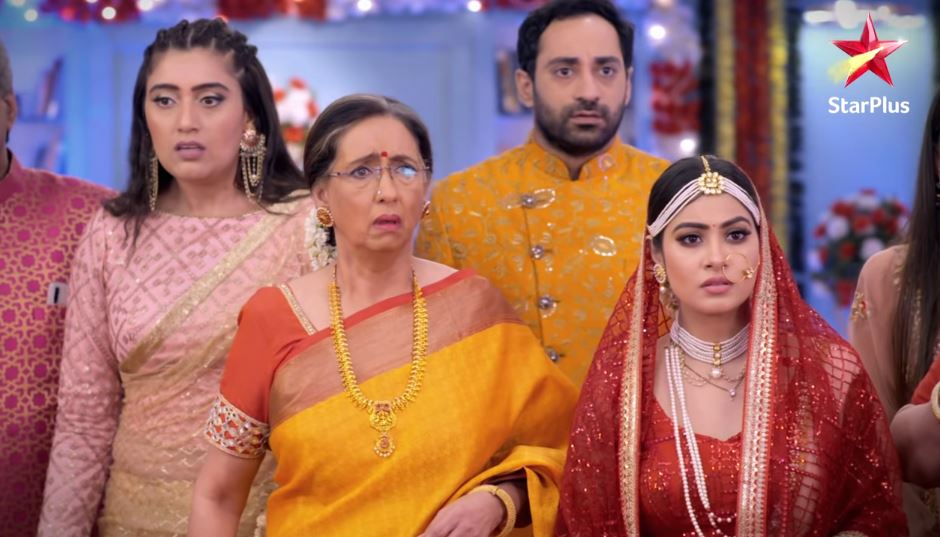 Yeh Hai Mohabbatein Shocks, denials and enmities 1st July 2019 Aaliya gets decked up in her bridal dress. She looks ahead to marry Yug. She doesn’t get the stone bangles gifted by Yug. She looks for the bangles and realizes that even Shagun got the real diamond bangles. Shagun tells her that the bangles are missing and everyone is trying to restore her happiness by bringing different bangles. Shagun then surprises her with Yug’s new gift. She tells Aaliya that Yug asked her to buy diamond bangles for his bride. Aaliya accepts the new bangles. She asks Karan to gift the bangles to Ruhi. Ruhi refuses to accept the bangles at first. Karan and everyone insists her to accept the gift.

Ruhi wears the bangles brought by Karan. Ruhi takes Aaliya to the mandap, where Yug is waiting for his bride. Everyone starts the marriage ceremony rituals. Ishita messages Raman to inform him about Aaliya’s marriage rituals commencement. Ishita and Aaliya tell the family that Raman isn’t coming for the wedding, he went for the important project meeting. Aaliya tells Yug that she had permitted Raman to go, knowing he would never go away on her wedding if the work wasn’t important. She understands Raman’s urgency.

Yug tells her that he will also not come between Raman’s priorities and stand by his decision. Aaliya and Yug want Raman to succeed in his big project. They appreciate Raman’s professionalism. Everyone praises Raman and stay happy to proceed with the rituals. The new enemy works out his plans to kill Raman. He waits for Raman’s death. Ishita watches Aaliya and Yug’s marriage ceremony and gets emotional. Ruhi cries that Aaliya won’t be a Bhalla now. Karan consoles Ruhi and tells her that she will also be Srivastav after the marriage. He teases her and tells her that he will become a Bhalla and stay with her family for her happiness. Everyone likes Karan and Ruhi’s cute moment. Ishita gets a shocking call from Shweta. She can’t react to the news.

She learns about the plane crash news. Karan tells the family that Raman was travelling in the same flight. The family can’t believe that Raman has left them forever. Everyone cries for Raman. Ishita tells them that they shouldn’t cry, Raman is fine and its her belief, since she is also alive. She faints down in tension. Mani, Karan and Bala rush to the airlines office to know about the passengers list. They learn that Raman was travelling in the same flight. They also get evidences of Raman’s death, which shatters the Bhalla family.