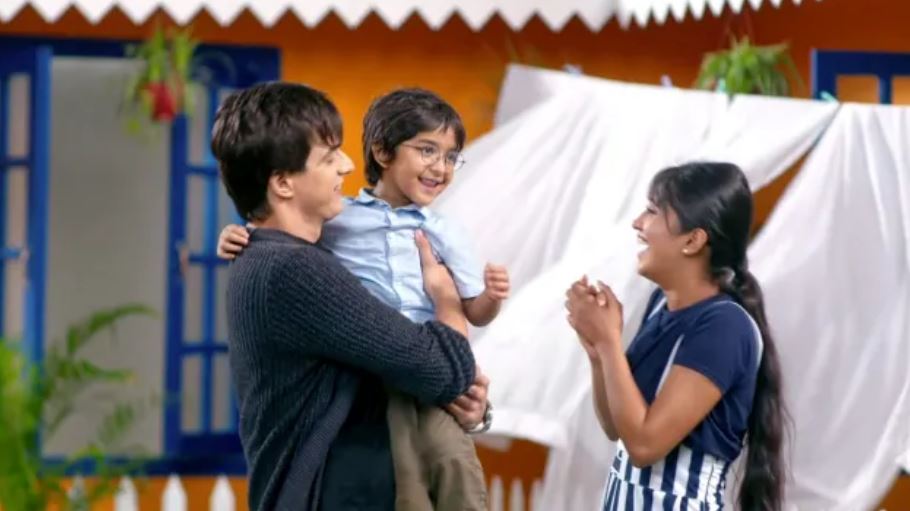 YRKKH Emotional burst for Naira 3rd July 2019 Naira and Kairav return home safely after the shocking chaos at the exhibition. Kairav misses his dad. Naira thinks of Kartik and longs for him. Naira’s friend takes care of her. Kairav asks why didn’t dad come home. They try to make excuses. Kairav doesn’t think this is true. He tells them that his dad isn’t so busy as Naira thinks. He wants to know where is his dad. Naira gets emotional on hearing his talks. She gives her phone to Kairav and asks him to call his dad to talk. She cries feeling its destined and she can’t stop Kairav from finding his dad. She wishes that Kairav meets Kartik. She thinks maybe its fate that Kartik came back on their lives. Kairav messages Kartik and asks him to come home, since his mum wants to meet him.

Kartik gets ready to meet them. Naira thinks Kairav will be heartbroken on knowing the truth of his fake dad. She is also broken within after seeing Kartik. She falls in a dilemma. Kartik messages Kairav that he is coming to meet him. Vedika lies to Dadi that she doesn’t know where did Kartik go. She tells Dadi that Kartik left for an important meeting. Dadi apologizes to Vedika. She asks if Kartik told her something. Vedika tells her that they have friendship between them and she can’t take Naira’s place ever. She tells Dadi that she can know Kartik as a friend. Dadi wants Kartik and Vedika to get married. Naira goes to the exhibition venue and misses Kartik.

She wonders why did he come to Goa. Kartik reaches her home to meet Kairav. He thinks he will have to clear Kairav’s misunderstanding and break his heart for his betterment. He wants to end the sweet bond he has with Kairav so that Kairav doesn’t get more false hopes. Naira doesn’t know why Kartik came in her life now when he doubted her at the time of her pregnancy and distanced her so much. She gets upset over the past. She loves Kartik a lot. Kartik feels a strong bond with Kairav and regrets to end it on a good note. Naira falls weak after spotting Kartik. She doesn’t want to lie to Kairav more.

She regrets that Kairav’s real dad is close and even then she is making him meet the fake dad. She is angry that Kartik doubted her and ruined three lives. She feels Kartik is responsible for Kairav’s longing. Kartik meets Kairav and gives him happiness. Kairav gets happy and hugs him. He shows his family drawing. Naira gets the same tarot card and doesn’t feel like she will get something she longs for and she lost before. She throws the card and doesn’t believe so. Naira’s friend meets Kartik. He thinks he is Kairav’s mom. She clears his misunderstanding. Kairav tells him that she is Naira’s friend, who takes care of her. Kartik asks for Kairav’s mom.

Kairav asks him to wait until his mum comes. Kartik feels Naira’s presence in the house when he sees a tigress toy. Naira leaves for home. Kairav tells Kartik about the event at the exhibition. Kartik thinks to leave. Kairav doesn’t let him go and plays football with him. Naira thinks Kairav can never meet his real dad and its better that he stays happy with his fake dad for time being. Naira reaches home and decides to make the fake dad away from Kairav soon. She happens to see Kairav playing with Kartik.

She gets a big shock on seeing Kartik playing with their son. She recalls their good moments and turns happy. She feels her dream has turned true. She dreams and joins them to have an emotional moment. Naira feels Kairav’s fake dad is his real dad. She thinks how did destiny play this game with them. She can’t believe such a big coincidence. Naira watches them secretly and gets overjoyed seeing their bonding. She hides from Kartik since she can’t face him with the truth.