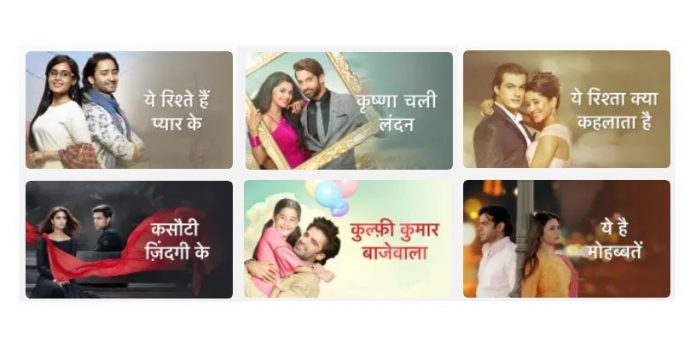 Star Plus Read Friday’s Top 2 Upcomings Kahaan Hum Kahaan Tum Sonakshi gets busy in her shoot. She doesn’t want Sumit to get drunk during the shoot. She dislikes shooting with him. Sumit doesn’t listen to her and calls off her request. Netra is proud of Sonakshi’s adjusting behaviour. Rohit turns up at the sets to apologize to Sonakshi. Sonakshi doesn’t want to forgive him. Netra tells him that Sonakshi can’t forget the incident so soon. She asks Rohit to meet her in the evening. He asks her to help him in getting Sonakshi’s forgiveness. He apologizes to Netra for creating troubles on her sets before. Sonakshi and Sumit get into an argument when he passes comments on her work.

Sonakshi scolds Sumit for gifting her the stolen watch, that actually belonged to Dr Rohit. She embarrasses Sumit by counting his mistakes. Nishi feels she should have better apologized to Suman. Yash tells her that apologizing is a good thing, it eases out things. Nishi realizes her mistakes. Yash asks Nishi to say sorry to his mom as well. She refuses to reconcile with her mom-in-law. She gets adamant. Pooja gets to hear their conversation. She turns upset. Nishi argues with Yash over their failing marriage, which was saved by Veena and Naren. Veena asks them to sort their differences if they want Pooja’s happiness. Sonakshi returns home after work and finds Suman still upset. Suman vents anger on Sonakshi. She then breaks down over her past.

Sonakshi sympathizes with Suman. Suman tells Sonakshi that she is helpless to make her children work. They have an emotional talk. Suman tells them that she knows the worth of money because of their bad times. She asks Sonakshi to not forgive Rohit and his family. Sonakshi agrees to her. Rohit meets Netra again and tells her that his family is his first most priority. He doesn’t want Sonakshi to stay angry with his family. He wants to apologize to her.

Reviewed Rating for this particular episode: 3/5 This rating is solely based on the opinion of the writer. You may post your take on the show in the comment section below.

Yeh Rishte Hai Pyaar Ke: Kuhu expresses her feelings to Kunal. She tells him that her dream came true, she can’t believe this. Kunal plays a drama that he is remorseful over Abir and Mishti’s friendship. He tells Kuhu that he is unsure of their alliance reaching marriage because of Abir and Mishti. This shocks Kuhu. Meanwhile, Abir takes Mishti to show her painting. He tells her that he got sure of their relationship and now he wants to share his feelings with her. Kuhu asks Kunal why is he so uncertain and talking negative. Kuhu is sure of her relation.

Kunal tells her that Meenakshi loves Abir a lot and will never accept Mishti for Abir. He asks Kuhu to help him separate Abir and Mishti. He tells her that Meenakshi will stop their marriage if she learns about Mishti’s move to enter Abir’s life. He tells that Meenakshi dislikes Mishti. He asks Kuhu to find some way. Kuhu realizes that Mishti was happy with Abir because they love each other. She doesn’t know what to do. Abir unveils the painting and asks Mishti to tell him if his feelings aren’t right. He tells her that its the biggest truth of his life, he loves her a lot. Mishti doesn’t want to listen to him and runs away, being shy. Mishti realizes her love for Abir. Mishti feels she also loves Abir. Kunal asks Kuhu to share his happiness and sorrow since they are going to become life partners.

Abir and Mishti feel the same love. Mishti is applauded since she is the reason for Kuhu and Kunal’s alliance forming. Mishti finds Kuhu and Kunal perfect for each other. Nanu blesses Mishti to find the best match for herself and stay happy. Abir tells the family that he also wants the blessings. They ask Abir about the type of girl he would like to marry. Abir wants Rajshri to get him married to a girl who is just like her. He indirectly signs about Mishti. Kuhu tells Varsha that they should start shopping soon.

Varsha asks Mishti and Kuhu to go together. Kuhu doesn’t know if she should be unjust towards Mishti. Kuhu can never lose Kunal. She asks Varsha to make Mishti meet Saurav Chauhan. Varsha thinks to talk to Rajshri about this new alliance. Abir tells Meenakshi that he enjoyed the family meet today. He asks her how did she agree so soon. She tells him that she wants Kunal’s happiness. She feels Kunal isn’t a strong person to bear second heartbreak. She tells that Kunal isn’t happy when Mishti is around. Abir tells her that Mishti did right and united Kunal with Kuhu. He asks her not to do anything against Mishti. She wants him to trust her. Kunal overhears them and wants to throw out Mishti from Abir’s life. Kunal finds ways to insult Mishti.