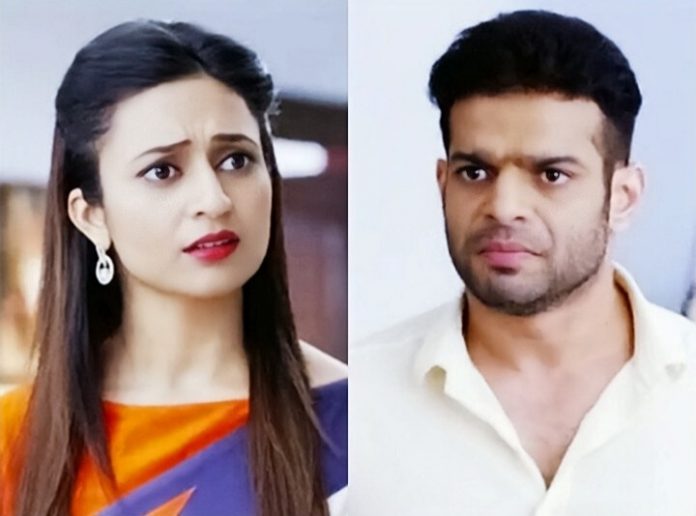 Yeh Hai Mohabbatein Torturing twists for IshRa Arijit discusses the new project with Bhallas. He answers a call suddenly and comes in Karan’s sight. Karan identifies the phone since he has given it to Ishita. Arijit knows that Karan is suspecting him. He makes an excuse and goes from the conference hall. Karan wants to know how did Arijit get Ishita’s phone. He goes after Arijit to know the truth. He thinks where did Arijit go. Arijit tells Karan that he is still in the office. Karan tells him that he wasn’t finding him, but was searching for the file. He rushes to Mani and Ruhi. He tells them that Arijit had Ishita’s phone. Mani doesn’t think that its good to suspect Arijit, who has come as an angel to help them in Raman’s dream project. Karan gets upset and wants to know Ishita once.

Mani asks him not to go. Karan tells him that he feels restless and has to meet Ishita once to be sure that Ishita is safe and sound. Mani asks Karan to be careful when he goes and not let the enemy doubt on their plans. Ruhi tells Mani that she also wants to go with Karan to clear the growing doubt. Karan worries for Ishita a lot. Mani permits them to go. Karan and Ruhi meet Sunita and ask her about Ishita. Sunita is threatened by Arijit. She lies to them that Ishita has left from the asylum to fulfill her motive. Karan tells her that he feels Ishita is still here. He wants to check the asylum.

Sunita tells him that Ishita has gone to work out her plan, she isn’t here, but he can check if he wants. Ruhi stops Karan from doubting Sunita, who is Ishita’s childhood friend and trustworthy person. She asks Ruhi not to trouble Sunita. She takes Karan home. Karan stays unclear. Arijit thanks Sunita for her favor. She asks him the reason for his revenge. Arijit tells Sunita that he won’t reveal his revenge intentions to her. He gets angry on her. He doesn’t want to fall in her trap. He behaves strange. Sunita finds him crazy. Karan and Ruhi tell Yug and Aaliya that Sunita didn’t let them meet Ishita.

They stay worried for Ishita. Karan tells them that he is feeling tensed since he has seen the phone with Arijit. He makes a plan to find out Arijit’s true intentions. Ruhi asks Karan and Yug to fight once again, so that they can know Arijit’s true intentions. Arijit tortures Raman and doesn’t let him drink water. He asks Raman to get up and try to reach the water jug. He then drugs Raman. He doesn’t reveal his revenge motives to his assistant. Ruhi and Aaliya tell Karan and Yug that they have to fight in the office in front of Arijit.

Arijit meets them at office. Ruhi asks him to join them for lunch. Simmi and Mihika try to meet Ishita. They meet Sunita and ask about Ishita. Sunita tries to write a chit and give them a clue. She sees Ishita on the camera feed. She finds her getting conscious and runs to drug her again. Simmi gets Ishita’s chit and feels something is fishy. Sunita is blackmailed by Arijit. She feels sorry to hurt Ishita. She is doing everything just to save her daughter. Sunita tells Arijit that Ishita isn’t responding to her. Arijit doesn’t want Ishita to die so soon. He wants to torture her more.