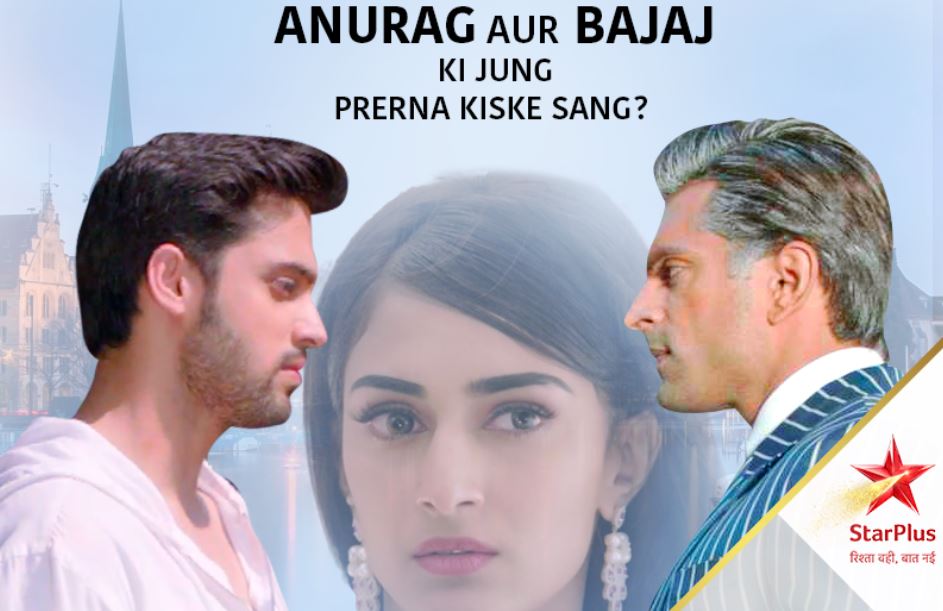 Star Plus Spoilers Today Top 2 Highlights Kasautii Zindagii Kay: Mr. Bajaj passes hints to Ronit to stop him from revealing the reason of marriage to Anurag. He doesn’t want Prerna to fall in trouble. He knows that Prerna has kept the reason a secret. Ronit gets angry on him for breaking their deal. He tells Mr. Bajaj that he is making a big mistake by believing Prerna. He tells that she isn’t innocent like she pretends. He knows she is much cunning since she has ruined Komolika’s life and also broke Anurag’s heart by marrying Mr. Bajaj. He feels Prerna isn’t loyal to Anurag. He speaks bitter things about Prerna. Anurag asks him what is he talking about, what’s the deal between Prerna and Mr. Bajaj.

Prerna worries that Anurag will know why she married Mr. Bajaj. She stops Ronit from saying anything. Ronit asks Anurag doesn’t he know the reason. He goes to tell Anurag. Prerna slaps Ronit to shut him up. Ronit catches her neck and hurts her. Anurag and Mr. Bajaj asks Ronit to stop hurting Prerna. Anurag diverts Ronit and saves Prerna. Mr. Bajaj attacks Ronit and turns him unconscious. Mr. Bajaj gets Ronit and his goons arrested. Mr. Bajaj thanks Anurag for saving Prerna from Ronit. He wants Anurag to get away from Prerna’s life.

Anurag doesn’t want his chapter to end ever, since he is determined to get Prerna with him. Mr. Bajaj leaves him with a warning. Anurag doesn’t think there is anything else that Mr. Bajaj can ruin. Prerna feels bad that Anurag and she aren’t destined to unite. She curses herself for hurting Anurag’s heart. Anurag meets Nivedita and tells about Prerna’s kidnapping by Ronit. She wants Anurag to depart from Zurich. Anurag imagines Prerna with him all the time. Nivedita feels sorry for Anurag. Mr. Bajaj and Prerna enjoy their trip. Mr. Bajaj challenges Prerna for an adventure trip. He wants to divert Prerna from Anurag’s memories. Anurag stays lost in Prerna’s memories. Anurag makes a plan to defeat Mr. Bajaj and take revenge on him.

Reviewed Rating for this particular episode: 2/5 This rating is solely based on the opinion of the writer. You may post your take on the show in the comment section below.

Pooja arrives home and asks Nisha why did Sonakshi come home. She learns about Rohit filing the defamation case on Sonakshi. She gets a huge shock and recalls the entire incident again, which freshens her wound. Suman is terrified thinking of the huge compensation. She is sure that she can never pay the compensation to Sippys. She awaits Sonakshi, who soon comes with a reply from Sippys. Rohit tells Pooja that he wants Sonakshi and Pari to get punished for their crime. He tells Pooja that they can’t let Sonakshi get away with the crime so easily because of their fears. Pooja cries to explain him that this will defame her as well.

He tells Rohit that Naren had managed the media and publications before, but the court case will bring out all the facts again. She clears out that she doesn’t want to file the case on Sonakshi. She asks Rohit to withdraw the case. Rohit tells her that he is her brother and will protect her. Deepa tells Pooja that Sonakshi should be punished so that she doesn’t do this again. Sonakshi tells Suman that Sippys didn’t believe her. She gets tensed. Suman worries that Pari will be defamed and lose her crown too. She gets a heart attack and tries to shout to Sonakshi. She collapses down. Sonakshi rushes to check on her.

She gets a shock on finding her mum critical. Veena explains Rohit that Sonakshi was right, the court case would defame Pooja and Pari. She asks him to talk to Sonakshi, maybe she is right and the culprit is someone else. She asks him to withdraw the case than hurrying up in his decisions. He refuses to talk to Sonakshi. He tells Veena that he is too tired and sleeps. Sonakshi rushes Suman to the hospital and asks the doctor to check her. The doctor soon informs Sonakshi about Suman suffering a heart attack.

He tells her that he will contact Dr. Rohit for operating Suman. Rohit doesn’t answer the call. Ajit speaks to the doctor and learns about the patient Suman Rastogi. Ajit tells the doctor that Rohit will never come to operate Suman.

Doctor tells Sonakshi that Rohit refused to come for the surgery. Sonakshi knows Rohit is stubborn and asks him to try calling some other specialist. Sonakshi refuses to take a selfie with a fan. She states that her mum is unwell and she can’t think of anything else right now. Sonakshi gives the consent for Suman’s surgery. Rohit turns up for helping Suman. Sonakshi and Pari don’t think Rohit would treat Suman well and suspect his intentions. Keep reading for more Star Plus Spoilers Today.

Reviewed Rating for this particular episode: 2/5 This rating is solely based on the opinion of the writer. You may post your take on the show in the comment section below.