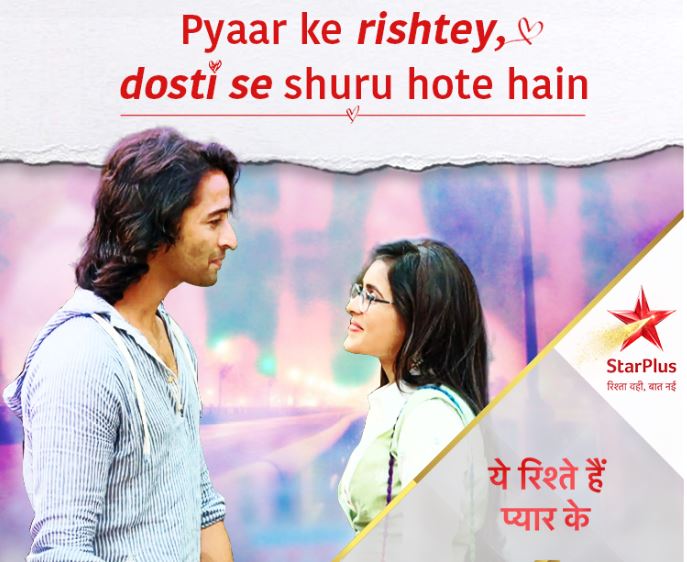 Star Plus Tonight Drama Kahaan Hum Yeh Rishtey Hain Pyaar Ke Mishti gets to realize that Abir has the same feelings for her. She gets happy for a moment. Meenakshi and Parul return home. Meenakshi finds the entire family in a drunken state. She gets angry and gets them back to senses. Nidhi jokes on Meenakshi. Mishti sees Meenakshi coming upstairs. She makes a leave. Meenakshi goes to check Abir. She finds him sleeping. She doesn’t see Kunal anywhere and calls him. Meenakshi learns that he is going to tell the truth to Kuhu. Kunal doesn’t listen to her when she asks him not to tell anything. Kunal tells Kuhu that he just has a problem with Mishti, and its Meenakshi’s plan.

Before he could tell her the plan of pretending love and marriage, Jasmeet interrupts him. She tells him that Meenakshi has come to pick him. Meenakshi apologizes to Maheshwaris on Kunal’s behalf. Rajshri tells that she believes Abir and Kunal. Mishti returns home and meets them. Meenakshi reminds Mishti her conditions. She asks Mishti to tell everyone about Kuhu’s mother. Abir is sure that Mishti had come and something was stopping her from accepting love. Nanu asks him to confess love to Mishti. He asks Abir not to get scared when he is in love. Abir likes his idea. He feels nothing can stop him, not even Meenakshi.

He wants to make Mishti confess love to him. He decides to profess his love in front of both the families. Nidhi tells them that Atul had sent the party video to everyone. Abir takes Meenakshi’s phone to stop her from seeing the video. He also wants to attend the mehendi function. Abir gets his phone and learns Mishti was calling him. Mishti and Abir get busy with their families. Meenakshi blackmails Mishti once again. Mishti feels the family will hate her if she insults Kuhu and Varsha’s lovely relation. Abir tries to confess love to Mishti and gives her some time. Meenakshi compels Mishti for her motives.

Rohit wears Suman’s clothes. Sonakshi’s maid and watchman check on Rohit, finding him sleeping in the living room. They beat Rohit when they see Rohit holding a knife in hand. Sonakshi gets scared hearing their screams. She goes out to check. She stops them and tells them that its Dr. Rohit. They laugh seeing Rohit wearing Suman’s night dress. The watchman tells Sonakshi that he had seen the knife and beaten up Rohit. Sonakshi asks Rohit why did he hold the knife during sleep. Rohit reasons out and makes them laugh further. Pari finds Rohit wearing her furry slippers. She asks him to remove her slippers. Rohit asks Sonakshi to return his clothes so that he changes and goes home. Suman and Pulkit come home from the hospital.

Suman gets disappointed seeing Rohit. He changes his clothes and makes a leave, when Suman taunts him a lot. Suman isn’t thankful that he has saved his life. Rohit finds her so grateful and selfish. He wants to just do his duty as a doctor. Suman tells him that she doesn’t like him and will consult any other doctor. Rohit asks her to do the wishful. Nishi buys a costly painting and thinks to place it on the wall, replacing the Television set. The maid reminds Veena about her promise. She wants to watch Sonakshi’s show on the living room TV. Veena asks Nishi to have her painting adorned on the reception wall.

Nishi likes her idea. Veena gets relieved to sort the matter. Pari tells Suman about Sonakshi and Rohit’s close bond. Pulkit tells them that Sonakshi and Rohit are just friends. They have an argument. Suman is angry that Sonakshi is meeting Sippys. Sonakshi gets Rohit’s jacket in cupboard. She wears the jacket and goes lost in his memories. She misses him. She rushes for her shoot. Rohan messages Pari by mistake. Rohan and Pari have a chat and get friendly. Tanya gets miffed and doubts on Rohan. Yash is grateful to Rohit for putting many efforts in finding the culprit, just to get justice for Pooja.

Rohit tells his family that actor Sumit Khanna is the culprit, who has plotted this cheap thing to defame Pari. He wants Sumit to accept the crime. Sumit shows tantrums on the sets. Sonakshi hears the storyline. She talks like Rohit on the sets. Netra gets surprised on seeing this. Sonakshi gets a call from news publisher. She agrees to attend the wedding function. Rohit and his family members meet Sumit on the sets. Rohit gets angry on Sumit. He asks Netra to come up with better script. Netra jokingly asks Rohit to pen down the script. Rohit and Sumit have a confrontation. Sumit accepts his crimes and isn’t scared of Rohit.