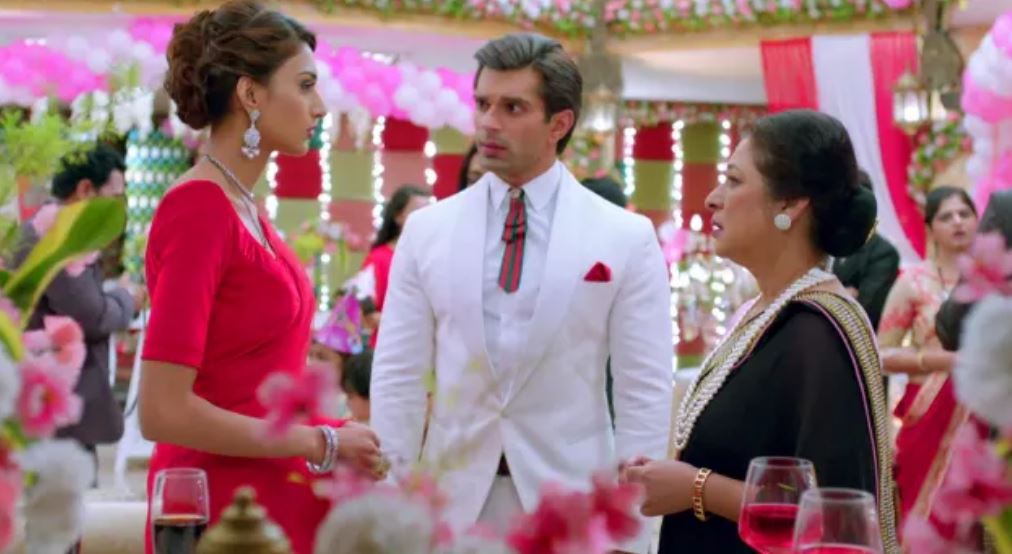 Kasautii Bajaj injured Trump card for Mohini Maasi plans to hurt Mr. Bajaj to frame Veena. She goes to Mr. Bajaj in the party. She compliments Mr. Bajaj and Prerna for looking lovely together. Veena gets the cake and does her cake. Prerna doesn’t like Veena working. She feels bad on seeing her mum working as a servant. Maasi asks Mr. Bajaj and Prerna to cut the cake with Kuki. She brings them together. Tanvi gets angry seeing this and asks Maasi why did she get Prerna close to Mr. Bajaj. Maasi tells her that its all a plan to make the chandelier fall over Mr. Bajaj. She goes and cuts off the rope of the chandelier partially. She asks Veena to go and make the chandelier proper. Prerna argues with Maasi for giving the work to Veena. Maasi apologizes to Prerna in front of Mr. Bajaj.

Veena goes to check the ropes and finds it cut. She alerts Mr. Bajaj about the chandelier falling. It gets too late. He gets hurt by the chandelier falling over his head. He faints down. Kuki cries and hugs Maasi. Maasi tells them that Veena dislikes Mr. Bajaj and she has done this to attack him. Mohini feels Veena can’t do this as she isn’t evil. She doubts Maasi. Prerna and Tanvi take Mr. Bajaj to the hospital. Tanvi loves Mr. Bajaj a lot. She doesn’t want to marry him for money. She wants to get his love. Prerna finds her much worried.

She consoles Tanvi. Maasi tells Kuki that her parents will come home soon. She wants to make Prerna fall in Mr. Bajaj’s sight. She plans to get Veena arrested to make Mr. Bajaj and Prerna more distant. She sends the police to Veena’s house. The police arrests Veena for the attack on Mr. Bajaj. Veena gets helpless and obeys the police orders. She tells her family that she didn’t attack Mr. Bajaj, it was someone’s plan.

Prerna asks Tanvi to go home, she will stay back with Mr. Bajaj while he gets treated. Nivedita scolds Maasi and asks her to stay in her limits. Mr. Bajaj gets recovering. Prerna asks him to get well soon. She learns about Veena’s arrest. She gets a big shock. Mohini gets Maasi’s pictures and exposes her plans. She wants to blackmail Maasi and take advantage. She tells Maasi that she had overheard her plans before itself and then clicked her pictures in the act to hold proof against her. She asks Maasi if she is ready to fall in Mr. Bajaj’s eyes. Maasi agrees to help Mohini. Mohini uses her as a trump card against Mr. Bajaj.