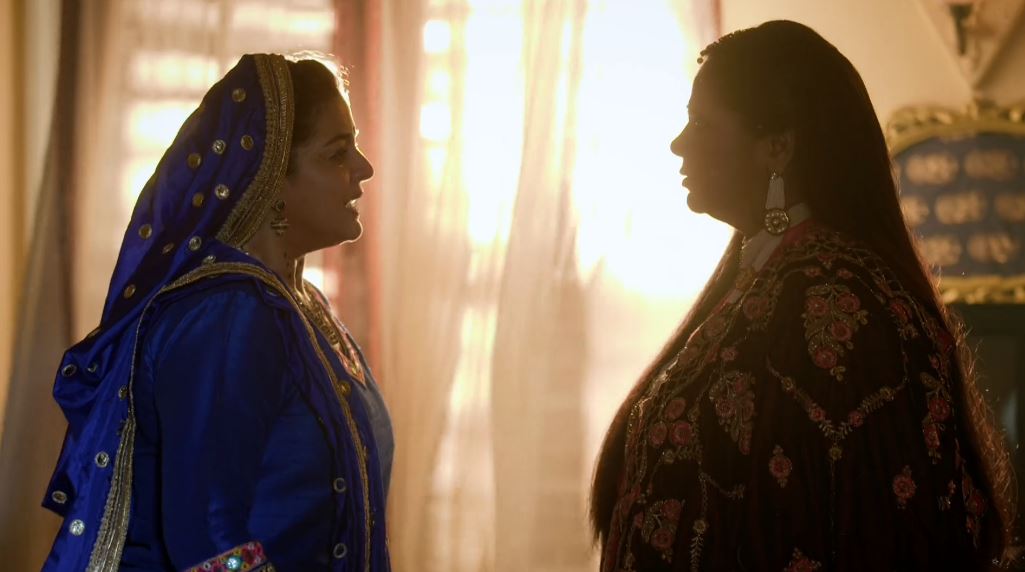 Rishtey Pyaar Meenakshi Parul huge Clash Abir in action Parul reveals the shocking truth that Kunal is also illegitimate. Parul gets against Meenakshi. She opposes Meenakshi’s decision. She doesn’t want Kunal’s life to get ruined. She tells Meenakshi that Mishti has done a lot on her saying. She asks Meenakshi not to ruin Kunal’s life and just get him back. She asks her to get Kunal married to Kuhu. She asks if she doesn’t love Kunal. Meenakshi asks Parul why is she saying this, she loves Kunal and family as well. Meenakshi tells her that she isn’t the family’s enemy, she is doing everything for her son’s betterment.

Parul tells her that she is ruining Kunal’s happiness for the sake of her ego and hatred. Abir overhears their conversation. He warns Meenakshi and asks her to call Kunal back. He summons Kunal for the marriage. He thanks Parul for bringing out Meenakshi’s truth. He didn’t expect this from Meenakshi. He asks Meenakshi to get Kunal home soon, else he will bring Kunal his way. He tells her that he isn’t threatening her but making a big promise, which he will definitely fulfill. Mishti thinks of Abir and gets to see him. Abir misses Mishti. He doesn’t want anyone to think wrong about Mishti.

He thinks that Meenakshi has done too wrong with Mishti. He wants to clear Mishti’s name. Abir rushes to find Kunal and also apologize to Mishti. Mishti misses Abir’s support. Abir feels his belief on Mishti didn’t shake down. Abir leaves from his home. Meenakshi and Parul continue their argument. Parul tells Meenakshi that she will reveal the truth to the family and children as well that Kunal is illegitimate. She doesn’t want Kunal’s marriage to break for the fact that Kuhu is illegitimate. Meenakshi asks her not to reveal it to anyone.

She seeks help from Parul in handling her rebellious son Abir. Parul keeps a condition to help her and asks Meenakshi to get Kunal and Kuhu married. She gives time to Meenakshi to think. She threatens Meenakshi. She tells Meenakshi that she will claim her rights on her son Kunal. She reveals the past that Kunal’s dad cheated Meenakshi and her. Abir finds Kunal and insists him to come with him. Atul goes to Maheshwaris as the groom. Abir wants to take Kunal back in time. Atul and Kaushal hide the fact from Maheshwaris that Kunal has run away.