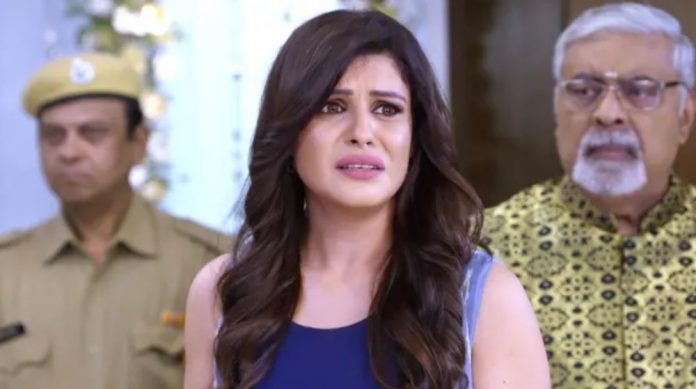 YHM Telly Reviews Natasha’s take on Bhallas Arijit calls the police to trouble Bhallas further. He doesn’t want Raman and Ishita to find any peace in their lives. He tells the cops about Natasha’s claims that Raman is her husband. Inspector assures to help Bhallas if they are right. Bhallas tell him that Natasha is disturbed and isn’t accepting the truth. They clear that Raman had undergone a face reconstruction surgery and lost his original face. Natasha tells the inspector that she isn’t lying, Raman is her husband. Arijit tells them that he has called the police, knowing the woman is a fraud. Ishita looks after Natasha.

Karan and Yug get angry that Arijit called the police to ruin their family happiness. Karan thinks Arijit has called Natasha here to put up this drama. Karan and Yug try to find out about Natasha’s doctor. Arijit stops them from getting any details, since Neeti is also admitted in the same hospital. He doesn’t want Bhallas to know anything about Neeti. Natasha tells Bhallas about filing the missing report to find her husband, who left her few months back. Arijit does a drama like he cares for Raman. He spoils the matter further. He makes sure that things get worse for Raman and Ishita. Inspector verifies Natasha’s legal complaint. He gets the details of Natasha’s complaint and shows the pictures to the Bhallas.

Raman gets a panic attack when Natasha’s claims get high. Raman wants to prove his identity. He doesn’t know who is planting such enemies in his life. He denies to know Natasha. Bhallas worry for Raman’s ill condition. Natasha pleads to them to let her take her husband. Ishita decides to prove Raman’s truth by calling the surgery. Arijit insults Ishita when he gets a chance. He tells her that its really bad that she got a stranger home in Raman’s place to get a big project. Karan and Yug get angry on him for insulting Ishita. Arijit clarifies that he is their well wisher. The surgeon’s statement fails to prove anything. Natasha refuses to leave Bhalla house.

Ishita permits her to stay with them until she gets convinced about Raman. Arijit joins hands with Natasha. He asks Natasha to take Raman’s DNA test. Ishita vents anger on Arijit for having such manipulated reactions on their sorrow. She scolds him for acting as their well wisher and backstabbing them.