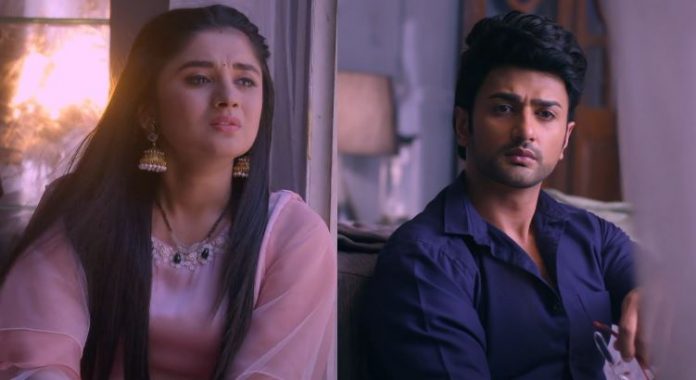 Guddan Akshat in shock by Antara’s evil ploy Akshat and family learns that Antara has tricked the police and escaped. He fears for Guddan. He tries to call Guddan and get her back home to secure her. Guddan doesn’t respond to him. Akshat worries that Guddan is in some problem. He doesn’t want anything to happen to Guddan. He rushes to her home and finds her venting anger on her relationship. He regrets for his mistakes. He finds Guddan fine. He informs her that Antara has escaped from the police. Guddan feels he is lying to take her home. She gets adamant. He tells the truth that Antara is very dangerous and may harm her. She tells Akshat that her dad got against her because of him.

She argues with him for breaking her trust and hurting her so much. She asks Akshat not to become the reason for her sorrow again. He complies with her decision. He respects her wish and lets her stay with her family. He tells Guddan that he can stay away from her for her sake. He doesn’t want to force Guddan. He frees Guddan from his relation. He knows Guddan loves him and will soon forgive him. He wants to wait for the day that she accepts him on her own. He expresses his feelings for Guddan. Angad falls in grave danger when he faces Antara. She tells him that she will be killing him, even when he isn’t much important in her game. She attacks Angad.

She tells him that she will release Angad if he accepts her conditions. She gets more evil. The family is in shock knowing how dangerous she has become. Antara tells them that she will ruin them. Akshat threatens to kill her if she hurts his family or Guddan. He takes the step to protect his family. Antara knows that he loves both Guddan and Angad. The family worries for Angad. Akshat realizes Guddan’s life is also in danger. He doesn’t want to scare Guddan by revealing about Angad.