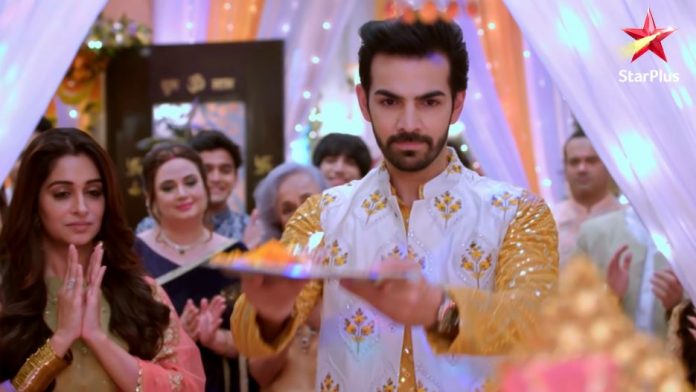 Kahaan Hum Romance twist upsets Sonakshi’s family Rohit pacifies Sonakshi in his own way. He thinks of his past once and tells Sonakshi about Raima’s crazy behavior. She is happy that he is moving on. He tells her that he has found the goodness hidden in his present, that’s her. He tells her that he is really happy that she is part of his life. He still wants to know what is she hiding and why. He drops her home. He convinces his mother Veena for attending the function at Sonakshi’s house. Veena apologizes to Rohit for slapping him. Veena convinces the entire family with the help of Sukhmani. Sonakshi faces problems because of Mhatre’s case.

The guests and relatives refuse to come to her house for the Ganpati puja. It gets too much when the pandit also refuses to come. He doesn’t want to perform the puja at Sonakshi’s house, thinking she is involved in a murder. Sonakshi sees the family upset. She tries to console Suman, who didn’t imagine to celebrate such dull festive. Sonakshi tells Suman that her friends will surely come. Sonakshi gets too happy on seeing the Sippys. She welcomes them and tells them the problem of pandit not coming. Rohit tells Sonakshi that this isn’t any problem. He asks Sonakshi to follow the internet and perform the puja rituals.

He assists Sonakshi and places the idol. Sonakshi gets happy that she has got Rohit. She feels love for him. Rohit tries to get help from ACP. He gets to know about Mhatre hiding in Mumbai with the help of some aide. Rohit promises Sonakshi that she will always be Parvati of her show, since the role belongs to her. He tells her that no other actress will replace her. Sonakshi wants to see this turning true. They get into a romantic moment. Suman gets angry on Sonakshi for getting close to Rohit, when its just a drama. Sonakshi explains that Rohit is just her friend.

Rohit knows Sonakshi is too upset over the problems. He asks her to be strong. Rohit hears Mhatre’s servant speaking to Sonakshi. He learns that the man had seen Sonakshi at Pune event. He wants to know if this same man is helping Mhatre. He tries to get the information from that man. When the man flees, Rohit follows him and calls the police to find Mhatre. He wants to prove Sonakshi innocent. Sonakshi doesn’t want to reveal about her help for Pooja. Nishi gets insulting Sonakshi during the function.

Netra fails to see Sonakshi’s humiliation. She declares the truth that Sonakshi fell in Mhatre’s trap just to save Pooja’s dignity. Nishi can’t believe this and gets stunned. Sippy family learn about Sonakshi’s great gesture. Rohit just wants to support Sonakshi always. She feels he has made the problems away from her life. She is grateful to Rohit for solving everything. He proves to be a right partner for her, even then they are faking their love relationship. They unknowingly get into a moment.