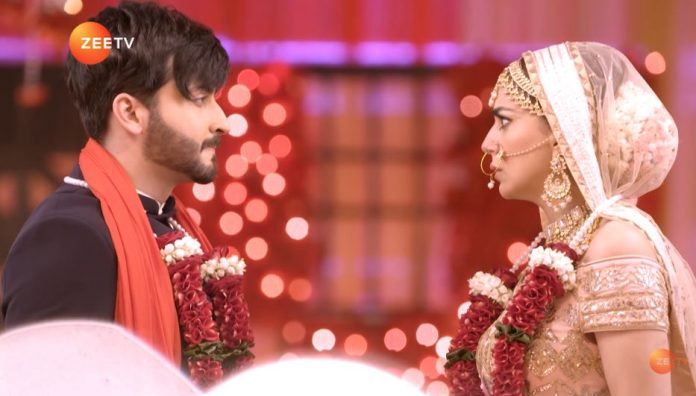 Kundali Bhagya Preeran marriage promo Zee5 Hits Today Upcomings Sherlyn breaks her relation with Prithvi and declares to him that she will do her responsibilities of Rishabh wife from right now. Rishabh tells Preeta that once he breaks his relation with someone, he doesn’t look back and says you know this. He says once the feelings in my heart end, it can’t be back and says I don’t have the strength, heart and friendship to see you with Prithvi. Karan tells Sameer that he will only marry Preeta and plans to marry her. Preeta and Prithvi get ready for their marriage. Karan marries Preeta secretly and then reveals that he was Preeta’s groom, much to everyone’s shock. He then publicly confesses his immense love for Preeta, which comes as a big surprise even for Preeta.

Gudiya Hamari Sab Pe Bhaari: Bua ji makes everyone enact the situation with Gudiya as if the groom and his family came to see her. She tries to train her how to behave infront of the groom’s family. Bua is playing the groom herself and tells that she/he wants to talk to the girl (Gudiya). Everyone leaves them alone. After some time, Bua complains to everyone saying Gudiya has broken her head. Gudiya says she didn’t do anything and says when she asked, what she can do, I lift a ball and hit. Bua says who will marry you if you continue to do such things.

Main Bhi Ardhangini: Adhiraj sees Mohini in danger and saves her. Shalaka sees Bhujang taking a dip in the water and thinks today we might unite. She puts the magical liquid in the water and looks on at Bhujang. She thinks to control his mind and make him the slave of Maha Maya. Maha Maya gets angry when Adhiraj doesn’t return home and calls him. Rani sees her and tells Jaichand that Maha Maya might see Chunnu. She says if Maha Maya gets angry seeing snake baby. Maha Maya comes and sees Chunnu. Adhiraj and Mohini are still stuck in the magical jungle.

Raja Beta: As per Ramesh’s orders, Rahul goes to Purva’s home and tries to murder her brutally. He suffocates her neck. Purva struggles to survive. Vedant thinks everything will be fine between Purva and him and goes to buy sindoor and stuff for her, but the sindoor falls from his hand making him worried for Purva. Vedant rushes to Nani’s house to check Purva. He will be saving Purva.