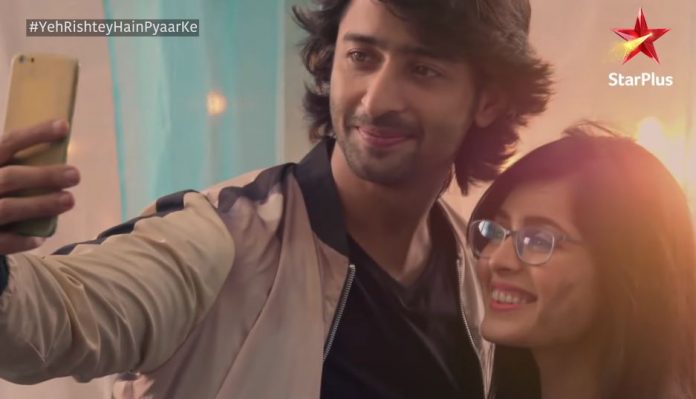 Yeh Rishtey Pyaar Divorce drama amidst romance shower Abir and Mishti spend romantic time on their dinner date. They feel its unfair that they can’t spend time together always. She doubts herself and asks him why he loves her so much. She feels as if she doesn’t deserve a perfect guy like her. He tells her that he is lucky to get her, she is the best and she shouldn’t underestimate her worth. He tells her that they will always be together. She tells him about Kartik and Naira’s love story. He is happy to know about them. He tells her that their love story will surely complete.

On the other hand, Kuhu and Kunal clash again. They end up arguing and hurting each other. They are getting more distant day by day. Abir tells Mishti that they can also romance, without the license of marriage. Mishti doubts the problem between Kunal and Kuhu. Meenakshi gets a nightmare. Parul apologizes to her and wants to make a new start. She asks Meenakshi to share her tensions. Meenakshi doesn’t tell her that Abir and Kunal’s father wants to return in their lives. She gets worried by the threatening calls.

She doesn’t want to tell anything to Parul. She feels Parul isn’t trustworthy now. Mishti tells Abir about Kunal’s warning about Kuhu on his marriage day. Abir can’t believe this. He suspects that Kunal isn’t interested in his marriage, since he wanted to avoid it. Abir wants to tell Mishti that Kunal wanted to run away from the marriage, but he got Kunal to the mandap with much difficulty. Meenakshi asks Abir why is he awake. Mishti hides from Meenakshi. Abir lies to Meenakshi.

Meanwhile, Kunal and Kuhu have a disgusting fight again. Nidhi questions Kuhu about her relation. Kuhu gets lying to Nidhi. She fakes romance with Kunal. Kunal gets angry on Kuhu. Abir wants to ask Kunal about his problem with Kuhu. He takes Kunal with him for a jog so that they can talk. Nanu feels the brothers are really inseparable. He blesses them to always be loving. Meenakshi expresses her dislike for Parul. She is angry on the way Parul blackmailed her. Abir and Mishti’s romance will be seen, while Kunal plans a divorce shocker for Kuhu.