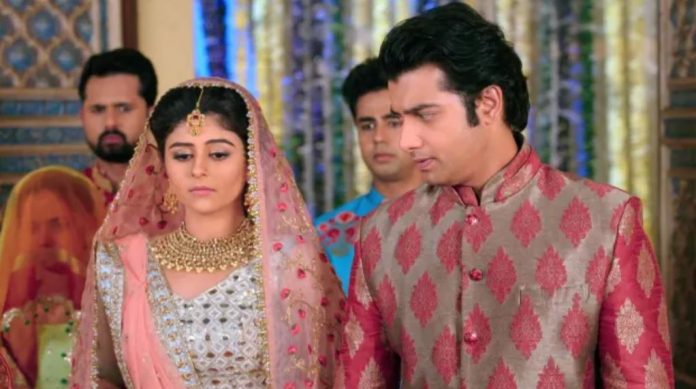 Muskaan Forced marriage obstructed by Ronak Collector gets the invite from Hukum. Muskaan is against her marriage with Hukum. When he sees Collector, he treats the village women with respect. He impresses the Collector. Maalik brings his family for the Roka. He asks Muskaan to go for the Roka. Hukum asks Amma to perform aarti of her would-be bahu Muskaan. Maalik permits Amma to do rituals as Hukum’s mother. Ronak is worried. He doesn’t know what to do to free Muskaan from the evil men. Amma tells Hukum that they will invite Guru ji for the marriage. He disagrees. Hukum and Muskaan sit for the roka. The men ask Hukum to make Muskaan dance for some time to entertain them. Ronak scolds the men.

Hukum makes the men out of this house. He compels Muskaan for the Roka. A lady comes and blames Hukum for kidnapping her daughter. Ronak smiles happily after hindering the Roka. Ronak, Maalik and Inder have conspired against Hukum to save Hukum. Ronak tells the Collector that Hukum has kidnapped a girl, which is a big crime. He asks Collector to take action against Hukum. Hukum tells them that he isn’t the culprit in this case. He wants the Roka to happen. He tells them to get proof against him.

Ronak asks Collector not to let Muskaan marry Hukum, her conditions won’t be met if he gets jailed. He convinces the Collector to support Muskaan. Hukum tells them that he is ready to give a written statement to support Muskaan. Ronak exposes Hukum’s bribe for the villagers. He asks Collector to not force Muskaan for the marriage. Muskaan gets freed when Ronak exposes Hukum’s crimes. Hukum gets exposed in front of everyone. The question arises that who will marry Muskaan. Inder wants to marry her. Ronak promises Muskaan that he won’t let her forced marriage happen.