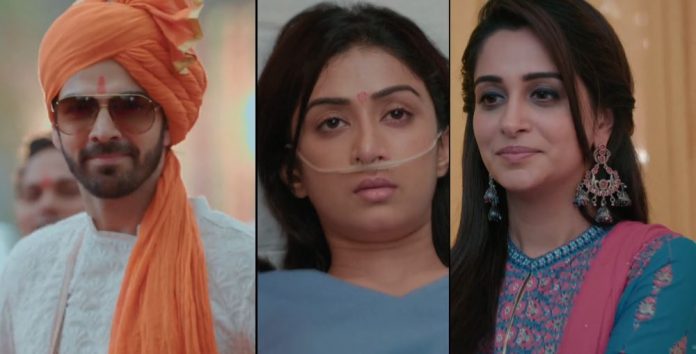 Kahaan Hum Ronakshi Love realization plus triangle Sonakshi and Rohit overcome their problems. He tells her that she is very important to him, as his own hands, since he is a surgeon and operates people by his hands. He tells her that she got very close to him. Sonakshi relates to his words. She starts feeling that he is also falling in love with her. She gets happy. She tells Rohit that she is lucky to get him. Rohit and Sonakshi have a romantic moment. Rohan and Yash track them with the help of police. They find Rohit with Sonakshi.

Rohit foolishly tells them about awkward night stay with Sonakshi. She stops Rohit from telling anything further. Yash realizes that Rohan has fallen in love with Rohit. He wants to help Rohit realize this too. Nishi feels guilty to insult Sonakshi. Veena tells her that Mhatre is arrested and now everything got fine. They talk about the family’s way of handling the media in a fearless manner. Nishi feels proud of Yash, who stood by Pooja in front of the media. Nishi tells Veena that she wants to make up for her mistakes by helping Sonakshi in any way possible. She melts her heart for Rastogis.

She feels Sonakshi has done a big thing for Pooja. Veena is happy that Nishi is accepting Sonakshi. Rohit drops Sonakshi and feels his heart going all out for her seeing her go away. He tells her that he can stay at her house if she wants. Sonakshi asks him to go home to his family. They have another romantic moment. Yash laughs seeing the great change in Rohit. Rohit gets lost in Sonakshi’s memories. He feels that he is in love. Sonakshi meets her family. She feels everything got fine. Suman tells her that she is proud that Sonakshi helped Rohit’s sister Pooja. She also approves Rohit and Sonakshi’s relation.

Sonakshi can’t believe this. She wants Rohit to forget Raima and move on with her. Suman feels Sippy family isn’t too bad. Sonakshi wishes that Rohit falls in love with her. She makes a prayer that Rohit moves on in life, only with her. On the other hand, Rohit meets his family, who constantly tease him about his night stay with Sonakshi. Rohit is happy that his friendship with Sonakshi is going ahead. He thinks if its love. Raima’s family tries to bring her out of coma state. They try to take everyone’s names, but don’t get any reaction.

Raima just reacts on Rohit’s name. She still loves Rohit and wants him. Sonakshi gets busy in the arrangements for Ganpati Visarjan, for which she invited Sippys home. Her name got cleared from the murder case. The friends and unit crew plan to visit Sonakshi’s home function. Sonakshi welcomes everyone heartily. She wants the event to be grand. Rohan speaks to Pari and learns about Suman’s problem. Suman asks Sonakshi to join the show as Parvati again.

Netra gives the good news that Sonakshi will get the show back. Sonakshi is happy seeing the problems subsiding. Sonakshi gets a surprise from Sippys, as a return favor from Nishi. She gets too happy when Rohit doubles the surprise. Rohit hugs Sonakshi and realizes his love for her. Rohit and Sonakshi get together in the unbreakable bond of love.