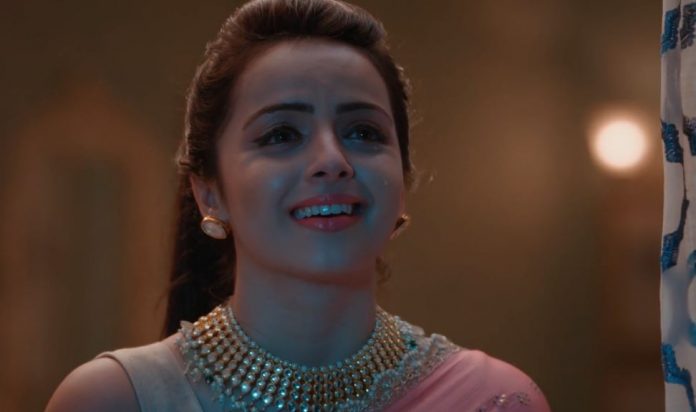 Star Plus Ek Bhram Today Muskaan Highlights Hukum and Maalik have an argument. Ronak sends Hanumant after Hukum, while Hukum handles his villagers. Hukum tells the men that he is lying to the Collector just to marry Muskaan. Hanumant overhears his plans. He informs Ronak. Ronak plays his card and provokes Tau ji. Hukum tells Collector that he is ready to give a written statement. Tau ji angrily exposes his plans. Maalik reprimands Hukum for cheating them. Inder expresses his wish to marry Muskaan. She refuses to marry Inder or anyone else. She tells Collector that she isn’t able to trust anyone.

Ronak asks Maalik not to decide right now and let some time pass. Maalik promises to protect Muskaan from all the men. He tells Collector that he will assure Muskaan’s conditions are met. He announces Inder and Muskaan’s marriage. Ronak wonders how to stop the marriage. Amma wants the marriage to happen well. She calls Maharaj ji home. Maalik asks her to do whatever she wants. Inder and Kuldeep send flowers for the girls. Ronak also gives flowers to Muskaan. Muskaan realizes the gift is sent by Ronak. She gets thankful to Ronak. She apologizes to him. Ronak hides from Maalik. Maalik forgives Muskaan. She believes that Ronak will save her.

Maalik has a liking for Muskaan. Amma welcomes Maharaj ji in the house. She asks the family to take Maharaj ji’s blessings. Ronak wants to find some way to stop the marriage. Maharaj ji gets to meet Muskaan and Chamki. Ronak learns about Inder’s bank loan. He gets an idea to spoil Inder’s name. Maharaj ji badly eyes Chamki. He blackmails her. He asks Chamki to get Muskaan to him. Chamki gets threatened. Ronak exposes Inder’s loan matter to Maalik. Maalik confronts Inder, while the latter manages to explain his brother.

Inder tells that he had taken a bank loan for buying a new house. Maalik forgives him and asks him to get ready for his marriage. Maharaj ji misleads Amma so that he can get Muskaan. Muskaan informs Ronak about the family’s evil plans. She threatens to die before anyone harms her dignity.

Kabir’s trust on Pooja gets more strong. Kabir wants to find out who has stolen the donation money. He tells Suman that he will soon catch the culprit. He lies about the snake seen inside the house. Suman blames Pooja for getting the snake. Kabir tells that they have to check all the room sand make the snake out. Rani stops Kabir from checking her room. Kabir doesn’t listen to her. He checks her room and finds Ranjeet drunk. He asks Jai to drop Ranjeet home. Rani fakes an apology and cries. Kabir tells Pooja that Ranjeet is always after Rani. He goes to meet Ranjeet. He slaps Ranjeet and asks him about the money.

Ranjeet tells him that he heard Rani talking about the money. Kabir suspects Rani. He asks Pooja to fake a fight. They both have a fight to show Rani. He asks Pooja to go to Rani’s house and find the money. Pooja tries to find the money in Rani’s room. Rani acts smart and hides the money in Pooja’s room. Suman finds the money hidden under the bed. She calls Kabir and family to expose Pooja’s move. Kabir can’t believe this. He scolds Rani for framing Pooja again.

Rani tells him that she is innocent. She is doing everything to make everyone against Pooja. Kabir goes to talk to Pooja. He gets to hear her love confession. She feels she doesn’t deserve a nice person like Kabir. Kabir tells Pooja that he loves her too. They both have a mutual love confession. Some goons enter the house and point gun at the family. The goons ask them to get all the valuables to save their lives. Kabir hits the goon to save his family.