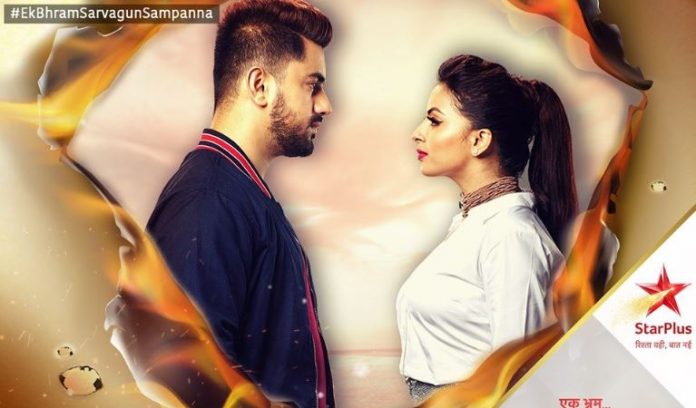 Ek Bhram making way for happy union closure Rani plays a trick and seeks help from Ranjeet. She wants to know if Kabir and Pooja are together. Pooja doesn’t want to lose her sister. She wants to make Rani realize her mistakes. Kabir and Pooja share a moment of love. They are very happy together. He gets close to Pooja, while she tells him that their families will never accept their relation. He tells her that if they miss this chance to mend their relation, they will always regret it all life. He assures her that he will fix things for them. Pooja gets happy that Kabir gave his word. On the other hand, Rani asks Ranjeet to take the goon’s disguise and come soon.

Ranjeet takes the disguise and tries to rob the house. He takes the family at gunpoint. He asks Pooja to give him all the cash. Pooja snatches his gun and takes him at gunpoint. She snatches the bag from him. Kabir catches Ranjeet and confronts him for his misdeed. Ranjeet tells Kabir that Rani had made him commit this crime. Rani meets them and accepts that she has done this to know the truth of their relation. She tells them that she will never let Pooja and Kabir unite. She challenges them. Pooja tells Rani that she will make her regret for her actions. She conceals Rani’s actions. She wants to get her lovely sister back.

Suman doubts on Pooja. She thinks if Pooja had called the goons to rob them. Kabir meets Pooja once again. He tells her that no one will see them now. Pooja hears Suman coming and alerts Kabir. She hides Kabir. Kabir and Pooja’s secret romance gets hidden. Kabir asks Suman what is she doing outside Pooja’s room. Suman doesn’t share her suspicion. Kabir and Pooja spend romantic time. He promises his support. Suman keeps a puja at home. Rani spoils Pooja’s hardwork by adding non-veg to the bhog food. Rani ruins everything to frame Pooja again. Kabir stops Suman from accusing Pooja. He tells Suman that there are CCTV camera fixed in the kitchen and they can easily find the culprit. Rani gets worried when Kabir determines to expose her.