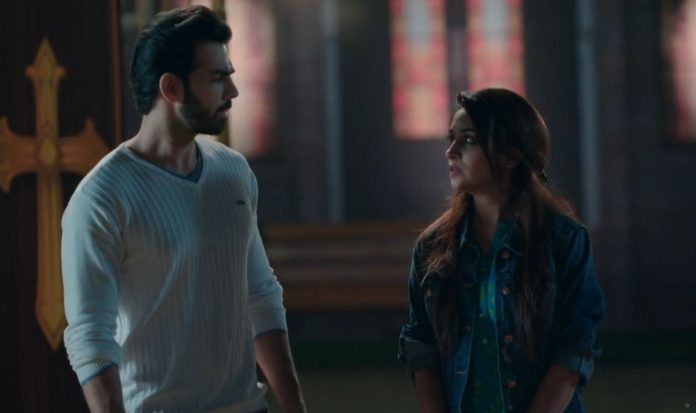 Kahaan Hum Quick Highlights Ronakshi Love Moment Sonakshi helps Rohit by requesting the Father. She gets permission to make prayers. Sonakshi and Rohit go inside the church and pray for Raima. Sonakshi is much selfless. She doesn’t want to pray for herself. She wishes that Rohit and Raima get happiness. Rohit tells the Father that Raima isn’t with him, he has no idea about her whereabouts, but she stays in his heart as true love. He tells that he has done wrong with Raima and wants her well being. Father knows his heart is guilty. He advises Rohit to just pray for the person he loves. Rohit gets a shock when he visualizes Sonakshi instead Raima, when Father prompts him to see the girl he loves.

Rohit can’t identify his feelings. He tells Father that he loves Raima a lot, but he hasn’t seen her. He admits to have seen Sonakshi. Sonakshi stays outside the church after leaving Rohit to complete his prayers, post lighting the candles for Raima. She sheds tears of sorrow thinking of her one-sided love for Rohit. She can’t take it that he is calling off their friendship. She regrets the way their friendship took a turn. She feels love won’t be wanted in their relation, which is already getting complicated by Raima’s presence.

Sonakshi tries to get normal before Rohit comes to her. Father tells Rohit that heart never lies to a person, and if he has seen someone else, then it would be the face of the girl he loves. Rohit starts realizing the unexpected, that he loves Sonakshi. He goes out to thank Sonakshi for helping him complete prayers on Raima’s birthday. Rohit is emotional and realizes Sonakshi is his true love. Meanwhile, Rohan and Pari spend time. They decide to have an affair. Pari flirts with him and proposes him for marriage. Rohan tells her that their affair doesn’t need a marriage certificate. Pari too doesn’t want the complications of marriage.

Rohan and Pari drink a lot and party. Rohit and Sonakshi have an awkward conversation because of the bitter argument over the phone. He feels sorry that he vented anger on Sonakshi. Sonakshi asks him to take care of himself. She knows that she can never get Rohit. Rohit realizes that Sonakshi is selfless and can do anything for him. He feels if this is love. Deepa calls Rohan and hears Pari’s voice. She questions him and realizes he is lying to him. Pari walks in front of Sonakshi’s car. Sonakshi finds Pari in drunken state and wants to know who is behind Pari’s condition. She takes Pari home, unaware that Rohan was accompanying Pari. Sonakshi wants to end her friendship with Rohit. He plans to confess love to Sonakshi. Raima turns conscious and sound, preparing to return in Rohit’s life.