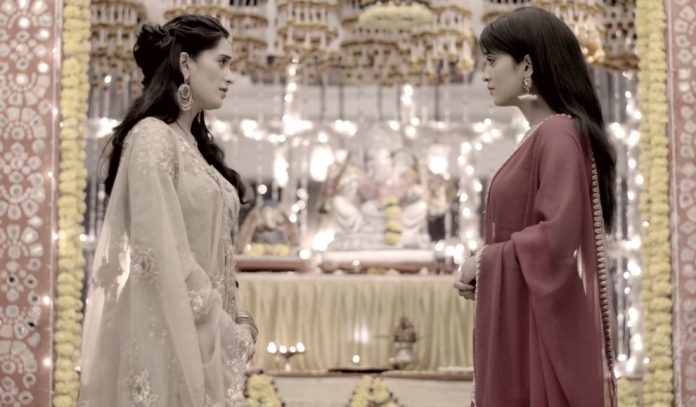 Yeh Rishta Bitter quarrel results in unexpected shock Kartik and Naira’s relation gets misunderstood by Vedika. Vedika finds him close and assumes wrong things. Kartik and Naira get happy when they see each other after waking up. They then realize their real situation, and get away quickly. They feel the pain that their situation got too worse because of their own mistakes. Their relation which was once so cherished appears wrong now. They regret over the past. Vedika confronts Naira, while Kartik goes to the family for Ganpati Visarjan.

Kairav and Vansh plan a sweet skit and impress the family. Kartik dances with them while they bid a farewell to Ganpati, to meet him next year again. Goenkas celebrate and plan an eco-friendly immersion for the idol. Kartik waits for Naira and looks for her. Kairav tells him that Naira would be coming. Suwarna looks after Kairav. Vansh shows a big heart while dealing with Kairav. Kartik feels proud of Kairav. Kairav wants Naira to come for the Visarjan. Dadi asks them to prepare other things until Naira comes. Naira gets blocked by Vedika.

Vedika gets into a huge argument with Naira. She puts serious allegations on Naira. Naira didn’t expect Vedika to have such filth in her mind. Vedika feels Naira is using Kairav for her motives to stay back in Kartik’s life and Goenka family. She accuses Naira for falling so low and staining a mother’s name to get back her ex-husband. She asks Naira not to take advantage of Kairav’s illness, else he may pay for her evil intentions. Naira reprimands Vedika for dragging Kairav in the matter in a negative way. She yells at Vedika and adds that Vedika won’t understand her situation, since she didn’t bear a child yet.

She asks Vedika to understand her situation. Vedika finds hard to understand Naira, and assumes that Naira is really trying to win Kartik. Naira finds Vedika angry. Vedika wants her to leave. Naira tells her that its not easy to leave abruptly, which would shock Goenkas again. She doesn’t want to hurt Vedika or others. Vedika tells Naira that she knows everyone’s situation and pretending innocent. She asks Naira not to be ignorant of Kartik’s misery. She tells Naira that Kartik is getting more hurt, the way Naira is posing challenges for him. She tells Naira that Kairav always hurts her by getting Naira with Kartik all the time.

She asks Naira how can she be so blind and snatch her rights. She asks why did she come back when she left by her own wish. She asks Naira to leave from their lives so that their lives get normal again. Naira asks Vedika not to misunderstand Kairav’s matter, since its destiny that united Kairav and Kartik. She clears that she didn’t wish to bring them together, but father and son found a way to meet. Vedika asks her to change the present. She asks her to leave Kartik for once and all. She doesn’t understand Naira’s pain.

Naira tells Vedika that none can understand her pain. Vedika calls her selfish. She speaks of her pain, that she isn’t able to stay with her husband. She asks Naira to keep her bad intentions to herself. Vedika vents out anger on Naira by insulting her further. She tells Naira that she didn’t take Naira’s place. She asks Naira not to snatch her place. Naira and Vedika hurt each other verbally. They both break down in tears.