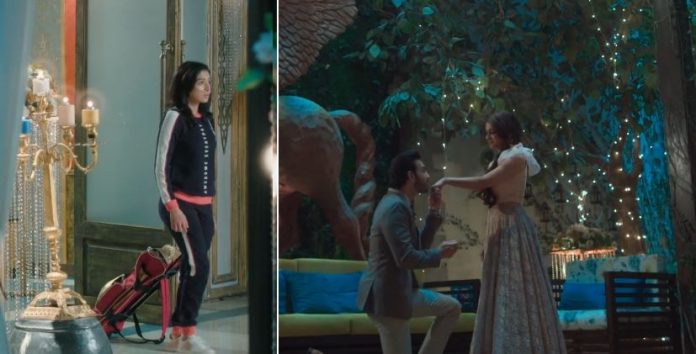 Sonakshi Rohit shocked with Raima unexpected entry Raima breaks out of coma. She recovers completely and gets back on her feet. She gets talking as well. She asks for Rohit first. Her mum tells about Rohit moving on with Sonakshi. She states about Raima’s coma duration. Raima has already seen Rohit with Sonakshi. She wants to tell Rohit that Sonakshi is the reason for her accident. Meanwhile, Rohan vents out his frustration on Pari. He isn’t able to sign her up for the ad contract. He doesn’t want Pooja to become the ad model. He can’t promise anything to Pari. She is much excited for her project. He doesn’t talk to her, which worries her. He thinks he has been rude towards her.

Pari thinks what’s wrong. Rohit and family wish Veena for her birthday. They celebrate Veena’s birthday. Sulochana tries to spoil the fun by speaking wrong about Sonakshi. Everyone is happy to get related to Sonakshi, except Naren. Naren falls in Sulochana’s words. He thinks if an actress will be good as Sippy’s Bahu. Veena asks him not to overthink. She likes Sonakshi a lot and thinks she will be perfect for Rohit. Pooja finds Tanya troubled. She thinks what has happened to Tanya. She asks if its because of her.

Tanya tells her that Rohan left for some work. Pooja doesn’t want her family to face any tension. Rohit tells his family that he is going to meet Suman and impress her, so that he can ask for Sonakshi’s hand. The family wishes him all the best. Meanwhile, Sonakshi is happy and awaits Rohit at home. Sonakshi finds it funny that he is following all her suggestions. She has played a prank on him. Rohit behaves weird while recalling Sonakshi’s instructions. Sonakshi controls his laughter. Rohit tells Suman that he has come to impress her. He gets sincere in his approach. Suman asks him is he normal or not. She asks him why is he behaving so weird.

Rohit wants her to get convinced. He learns that Sonakshi had played the prank on him. Suman accepts Rohit’s alliance. She keeps a condition that Sonakshi won’t quit her work. Rohit agrees to her, since the women is his family have their own careers. He doesn’t think anyone in his family will object to her. He promises to keep her happy. Veena wants to talk to Rohit about Sonakshi’s acting career. She doesn’t want to spoil Rohit’s mood. Rohit is happy with Sonakshi. He plans a surprise engagement for Sonakshi.

He seeks advice from Pulkit, who meets him for the internship. Pulkit feels Sonakshi is lucky to get a life partner like Rohit. Rohit wants to make his relation official. He thinks this will be best surprise for Veena as well. Sonakshi wants to gift something special to Veena. She thinks of Raima, whose mum doesn’t want her help now. She thinks its strange that Raima’s mum is avoiding her. She doesn’t know the reason. Raima’s mum wants to shift her to the Chandigarh hospital. She doesn’t want Raima to stay in Mumbai for long.

Raima wants to meet Rohit once to tell him about that night’s incident. She gets a chance to take a cab. She gets willing to reach him soon to bring out Sonakshi’s truth. Rohit plans his engagement with Sonakshi. He proposes Sonakshi in Veena’s birthday party. He gets an unexpected shock on seeing Raima back. Raima hugs Rohit and reveals the cause of their separation, Sonakshi. She tells him that Sonakshi is responsible for her accident, which makes Rohit against Sonakshi. What will happen next? Keep reading.