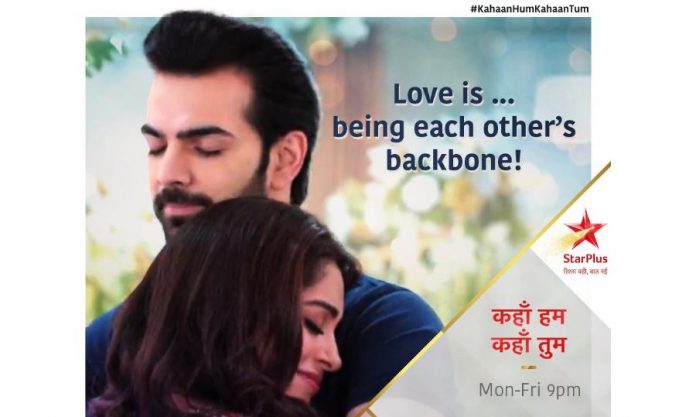 Kahaan Hum Pleasant moments drama and much more Sippy family welcomes Sonakshi home. They treat Suman nicely. Suman tells Veena that she had to come for the sake of Sonakshi’s happiness. She wishes happy birthday to Veena. Veena is happy seeing Suman’s good chance. Sonakshi looks for Rohit. She wants to meet him. Rohit arrives there and meets everyone. Sonakshi and Rohit steal some time. Suman asks Rohit to meet them as well. Sonakshi gets a unique gift for Veena. Veena finds the electric rice cooker. Everyone finds it weird. Rohit finds it unique. He tells Veena that just Parvati could give such a gift on birthday. He tells Sonakshi that its a thoughtful gift.

Sonakshi tells Veena that this isn’t her gift, the cooker is from Rohit’s side, so he is too much excited. She asks Veena to check the cooker and find out. Veena gets amazed seeing the real gift. Veena is happy seeing the Lord idol. She praises Sonakshi for such a nice gift. Sippy family feels Sonakshi is really filmi that she created the drama build up while gifting the gold idol. Sonakshi wants Veena to stay happy. She gives her best wishes. Rohan also gifts something special to Veena. He cancels his contract with Pari.

He tells Veena that family matters a lot to her, so he would also promise the same to her. He tells that Pooja will shoot for the ad. He values family over anything. Everyone applauds Rohan, but Pari gets upset. Pari wanted to get the project. She doesn’t like Pooja, being her competitor. Suman realizes that Pari is upset hearing the news. She asks Pari not to leave the party. Rohit and Rohan congratulate Pooja for her new project. The Sippys are happy with Sonakshi bringing happiness and positivity in the family. They aren’t aware of Rohan and Pari’s growing bond. Suman too learns about the shocking affair between Rohan and Pari. She doesn’t support Pari in her wrong attempt, knowing Rohan is happily married to Tanya.