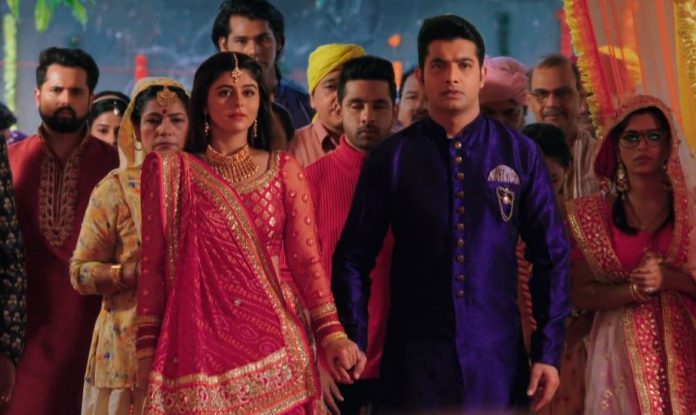 Star Bharat Muskaan Stunning twists post huge revelation Muskaan pleads for Ronak’s life. Ronak asks her not to lose so soon, they will keep fighting. Maalik plays his move and gets them punished in the least expected way. Muskaan doesn’t want to bear injustice. Ronak tries hard to save her. He gets punished by the Panchayat. Maalik manipulates Chamki further so that Muskaan changes her decision. Muskaan wants to protect Chamki. Amma and Maalik pull the drama and break Muskaan’s courage. Muskaan tries hard to convince the villagers to help them. None has courage to get against Maalik. Muskaan gets helpless seeing Ronak’s weak state.

She apologizes to Maalik and tells that she accepts her defeat. She begs him to get Ronak and Chamki spared. Maalik gets happy that she has finally understood his point. He tells her that a woman can’t do anything without a man’s support. He indirectly asks her to hold his hand forever, so that her life gets easy. He tells her that she can only get protection if she gets married. Hanumant tries to tell Ronak.

He gets the Collector madam there. Collector asks Maalik if he is torturing Muskaan again. Maalik lies to her that Muskaan has decided to marry and she called everyone to break the announcement. Ronak prays that Muskaan gets saved from the big problem. Muskaan gets an idea to fail Maalik. She tells that she has called the Panchayat since she has chosen her life partner. Maalik gets happy that she will choose him.

He doesn’t think that there is anyone more suitable than him. Muskaan names Lakhan which shocks Maalik and his family. Chamki and Deepa are happy for Muskaan. Muskaan praises Lakhan who is the best match for her. She tells Collector madam that Lakhan has always protected her. Collector lets her do the wishful. She lets Muskaan and Ronak perform the Aarti in temple together. Maalik stays angered. Muskaan wants to marry Ronak soon. Maalik can’t take it anymore.

He threatens Ronak for refusing to marry Muskaan if he wants to save their lives. He tells the Collector that Lakhan is just a servant and may not be loving Muskaan. He makes Ronak admit that he doesn’t want to marry Muskaan. Ronak’s heart sinks while making such a shocking declaration. He refuses to marry Muskaan on Maalik’s orders. He claims to be working for Maalik as his servant. Muskaan gets disheartened. Maalik learns that Lakhan is Ronak, who has been cheating him since long. This huge revelation of Muskaan and Ronak’s relation shocks him. What will Maalik do with them now? Keep reading.