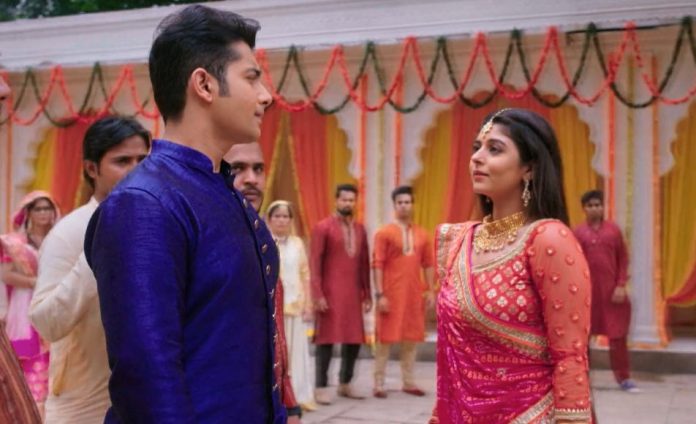 Saaho supports Ronak Muskaan Election Twists next Maalik makes an attempt to molest Muskaan. Amma surprisingly stops him from committing the heinous sin in the Mata pandal. She stops him by convincing hard. She tells him that he shouldn’t disrespect a woman. He tells her that he won’t stop at any cost. He gets angered that Ronak and Muskaan have been fooling him until now. She asks him to at least wait until Navratri ends. Maalik doesn’t listen at all. Ronak stops Maalik for molesting Muskaan. He gets tearful eyes when he sees Muskaan in such trouble. He gets Inder at the knife-point to threaten Maalik. Maalik challenges him and promises to kill him.

Ronak tells Maalik that he doesn’t know him, he will burn Maalik’s Lanka and take his wife. He takes Muskaan with him. Maalik sends his goons after Ronak and Muskaan. Ronak reaches the collector Mrs. Saaho’s house. He doesn’t get an entry in her house. He tells Muskaan that its all Maalik’s trap. He sees the goons guarding there. Muskaan loses hope that they will get out of Vidhangarh. Ronak asks her to never lose courage. They get a help from an unknown old lady, who shares her worse story with them.

She tells them that she would like to save them from Maalik. She supports them and wants them to fight Maalik. Maalik joins hands with Hukum. He reveals Ronak and Muskaan’s big fraud. The evil brothers get together to take revenge on Ronak, when they were themselves battling at first. Maalik tells Saaho that women won’t be contesting in the village elections. Ronak hinders him and tells Saaho that Muskaan, his wife, will be contesting to win the Sarpanch post. Muskaan enrols her name. Maalik and Hukum decide to oppose Muskaan by making Amma contest in the elections. Maalik sends his goons to kidnap Ronak and Muskaan again.