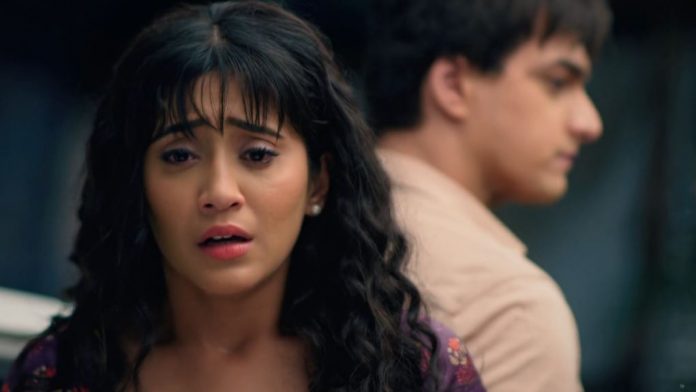 Yeh Rishta Shocking emotional breakdown for Kaira Kartik and Naira’s heated argument yields an emotional moment where they think like parents first, respecting each other’s emotions. They both are right on their fronts and everyone is aware of this. Kartik tells Naira that they shall meet in the court and fight for the custody. She begs him not to drag the personal matter to the court. Kartik is ready to drop the custody case if she is ready to give his rights on Kairav. She tells him that he can never take Kairav with him to Goenka house where he stays with his wife. She asks Kartik how will Vedika look after Kairav there. She asks if Vedika will focus on her personal life or Kairav.

She wants Kartik to understand that Vedika wants to move on in her marital relation. She puts some sense in Kartik’s mind. She can’t tell him that she is going away for his sake. She hides about Vedika’s suicide attempt. Elsewhere, Vedika is scared that Naira will tell Kartik about her compulsion for divorce. She doesn’t know how will Kartik react knowing she has planned this divorce thing. She doesn’t want to face Kartik’s wrath. She knows what Kairav means for him. Naira begs Kartik not to snatch Kairav from her.

Kartik knows that Kairav can’t stay without Naira. He understands a child’s need of a mother, since he had lost Soumya too. He tells Naira that he will never make Naira away from Kairav, she will have rights on him, she can keep Kairav with her and raise him, but still he will have all the rights on Kairav. He tells her that he will take all the decisions related to Kairav’s life and future. She hopes that he drops his anger, but he doesn’t listen. He tells her that she has hurt him a lot, and he isn’t hurting her back, he is just asking for his rights on his son. He feels its justified.

Gayu is upset thinking Kartik will bring Kairav home and that would snatch Vansh’s position in the house. She gets insecure about Kairav’s homecoming. Naira begs Kartik and Goenkas till the last moment. Kartik and Naira are deeply worried. Singhanias find Naira’s sorrow and connect with her. They want Naira to stay happy. Bhabhimaa doesn’t want Naira to suffer more. She thinks what lies in Naira’s fate. She doesn’t want Kairav to get torn between his parents. Manish pacifies Kartik’s sorrow. Kartik doesn’t want to lose his son.

Naksh pacifies Naira on seeing her shattered state. He knows that both Kartik and Naira are right, and still they are against. He wonders who will win between them. Kartik curses himself for doubting Naira and making her away forever. He is scared of his own self. He tells Manish that he is afraid to ask anything wrong again, that makes the situation more worse. He shares the pain that he is losing belief on himself. Naira explains that she didn’t wish to hurt Kartik again. She feels guilty that she hasn’t informed Kartik beforehand. She curses herself that she has taken wrong decisions always. Kartik and Naira want the custody some way.

Naira wants to take this extreme step just because of Vedika. Naksh understands her good intentions. Kartik and Naira want their families to hire the best lawyer for the custody case. Manish and Naksh try to contact the same lawyer Damini in order to ensure their win. They don’t know that they are contacting the same lawyer for Kairav’s custody. Goenkas and Singhanias get too worried, since both of Kartik and Naira are right on their fronts.

Dadi feels it would be better if Kartik and Naira sort the matter out of the court. Dadi is worried that things have turned too worse unexpectedly. Kairav tells Kartik that he wants a happy family with him. Kartik doesn’t want to talk to Naira and makes excuses to disconnect the call. Naira understands that Kartik is also right and sympathizes with him. Kartik doesn’t pity her and insists her to fight the custody case, only to lose it. Kairav will be uniting Kartik and Naira this Navratri.