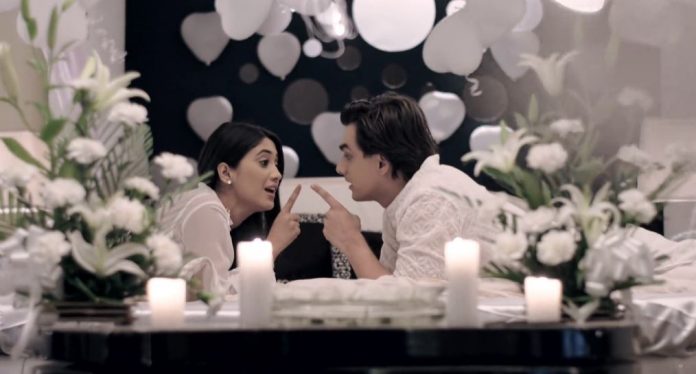 Ye Rishtaa Kartik Naira love Retest Coming twists Damini prepares Kartik for the hearing. She asks him not to say anything unexpected in the case. Kartik tells her that Naira would never say anything wrong against him. Damini asks him to be prepared for the courtroom drama, where the unexpected happens always. Naira’s lawyer Mr. Kumar also advises her to lie if needed, in order to get her son. Naira doesn’t want to lie or manipulate to win. She shows her belief that Kartik will never raise questions on her character or upbringing. Naksh is also sure of this. Kumar tells her that Kartik may not hate her, but his love for Kairav will make him do anything.

Kartik feels bad to speak against Naira. He sinks in sorrow again. Vedika feels guilty seeing him. Kartik gets rude to her again. She feels she doesn’t have any place in his life. Kairav and Vansh fight to get the same toy, while Kartik and Naira explain them that fight doesn’t yield anything. The couple also gets some sense while explaining the kids. Kartik promises to not fight with Naira for anyone. She gets hopeful that he will drop the case. Kairav tells about his dream to have both his parents together. Naira knows this isn’t possible. He asks Kartik to take them home, but Kartik asks for some time.

Naira and Naksh prepare for the case, and get delayed to reach. Damini doubts that Naira is playing a victim card and gaining an advantage. Kartik doesn’t think Naira can leave her ethics to win the custody. There is much tension in the families. Vedika feels sorry that she is wishing against Kartik’s wish. Kartik gets tensed in the court when he faces the lawyer’s allegations. Naksh wants Naira to be strong if she wants to win Kairav’s custody. Kartik feels Naira has run away with Kairav again, when she gets late.

He gets a relief when she finally turns up. Naksh explains how Naira and Kairav got hurt at home while leaving for the court. Kartik worries knowing its the emotional low phase that’s making Naira lose out. Naira badly wants to get her son’s custody. The lawyers brainwash them to get against in order to get the custody. Kartik and Naira’s love gets tested in the court, when they have the same goal, that’s to get Kairav.