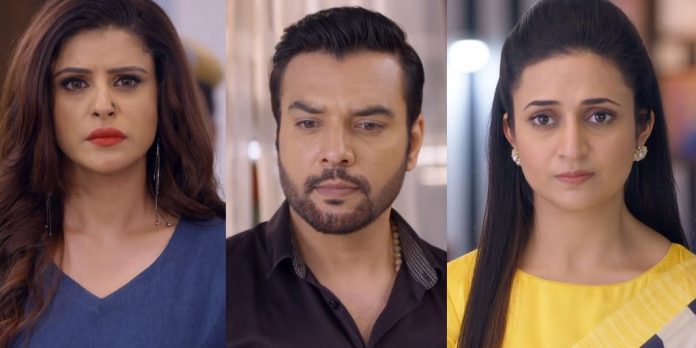 Yeh Hai Mohabbatein Neeti entry digs Ishra past Raman asks the family to believe his identity. Everyone believes him, except his mum, who has been getting calls from an imposter. Everyone consoles her. Mrs. Bhalla doesn’t believe him even after his emotional speech. Sunil uses the voice modulator app and Raman’s voice to fool the Bhallas. He praises Natasha for giving him such great ideas. Mrs. Bhalla gets another call from fake Raman. She gets panicking and tells Raman that she can’t believe him. He loses his cool and shouts on the caller, unaware that Natasha and Sunil are behind it. Raman wants the cops to arrest the fraudster.

Raman is worried that he is losing his mum. She tells them that Raman is in danger and she has to save him. The family asks her to stop believing the imposter. She doesn’t know who is the real Raman. She collapses and this makes the family worried. Sunil tells Natasha that now Bhallas won’t be after them. Arijit is after them right now. Arijit sends Mamta to Natasha. Mamta does a drama that goons are after her. She asks Natasha to help her. She tells Natasha that she will stay in house to get saved. Natasha doesn’t want Mamta to be spotted by Bhallas. She asks Mamta to leave. Mamta threatens to expose her.

She rushes to Bhalla house and finds the police there. She tells the inspector that Natasha is threatening her. She tells how Natasha has made the plan against Bhallas and created the illusion that real Raman is someone else. She tells that it was Natasha who made her lie to Bhallas that real Raman donated blood to Ishita. She clears the matter that there was nothing such, it was just a lie. Natasha gets worried that her plan came out. Mamta tells them that Natasha bribed her and also captivated her family. She apologizes to Bhallas. She reveals that Natasha is the murderer, she has killed the doctor to frame Yug.

The Bhallas can’t believe that Natasha could kill someone. Arijit messages Sunil to testify against Natasha if he wants to save himself. Sunil feels sorry and helpless. He tells the police that Natasha has really committed the murder. Natasha can’t believe that her brother is framing her in the murder case. She asks him did he go mad that he is giving the wrong statement. He knows she is innocent. He can’t help her. Natasha gets arrested helplessly. Natasha wanted to get Shardul/Raman so that she could access the locker having diamonds.

Her plans fail because of Arijit. Arijit learns that Natasha got arrested. Bhuvan informs him that Mamta acted well and trapped Arijit. Arijit asks him to keep an eye on Mamta. Bhallas are relieved that Natasha is caught up. They realize that there is no real Raman and it was Natasha’s plan. They apologize to Raman.

Meanwhile, Ishita sympathizes with Mansi, who was provoked by someone to shoot her. She withdraws the case and wants to help Mansi, who is already in trauma post her husband’s death. Raman is happy to see her big heart. Ishita and Raman have moments of peace. Ishita comes across Neeti, Arijit’s daughter. She wants to help Neeti. She feels like she knows Neeti. She tries to recall if she met Neeti before. What will Arijit do to keep Neeti away from Bhallas? Keep reading.