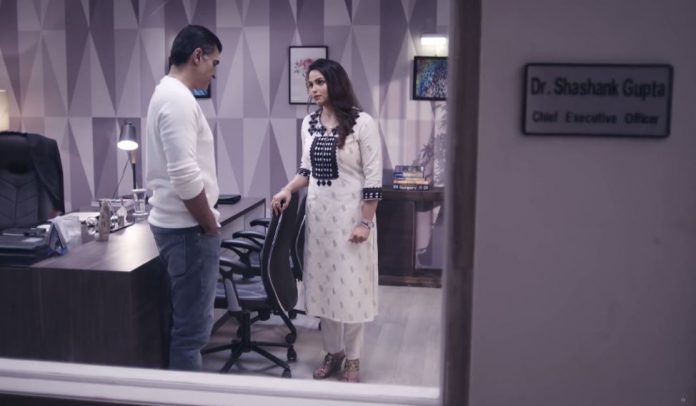 Sanjivani Shocking question stuns Shashank Sid and Ishani decide to get Jessica’s last wish fulfilled. Sid tells Ishani that they should talk to Shashank and seek permission to keep the marriage function privately in Sanjivani. Shashank is happy to know that Sid and Ishani are thinking so much about their patients. He tells them that Juhi was also such an intern who thought for the patients’ happiness factor. Shashank tells them that he will allow them to conduct the marriage. He is happy that Sid and Ishani are following Juhi’s foot steps.

He tells them that he would be more than happy to help Jessica in her final days. He wants to give her happiness too. He asks Sid to talk to Vardaan an seek his permission as well. He wants Sid to convince Vardaan so that there isn’t any hurdle later on. Sid and Ishani get the big task to convince Vardaan. Ishani wants to inform Vardaan, while Sid tries to cook up a story. Sid tells her that he isn’t doing any crime, he is playing smart to get his motive fulfilled. She tells him that she knows the consequences of such tricks. She regrets over her parents’ huge mistakes. He tells that she shouldn’t have guilt over her parents’ crimes.

She still believes that she should inform Vardaan to get official permission. Vardaan learns the matter about Jessica’s marriage, her last wish. Ishani tells him that Jessica has less time to live her life, they want her to get Jessica married. He surprises them by giving his consent about the marriage function. He has a hidden agenda behind this. He loves Anjali and wants her to realize her life’s loneliness. He wants Anjali to know his worth and accept his love. Vardaan wants Anjali on his side. Sid doubts on Vardaan’s approval. He tells Ishani that Vardaan is up to something, he doesn’t do anything without his profits. He wonders why is Vardaan doing this for Jessica. Rishabh also wants to know why did Vardaan permit Sid and Ishani.

Vardaan tells him that marriage rituals often make people realize their mistakes. He wants to enjoy the marriage functions with Anjali. Shashank gets delighted knowing Vardaan has agreed to conduct the marriage functions in the hospital. He breaks the news to the nurse and gets emotional. Sid and Ishani spread the news in the hospital. They try to arrange the things. Rishabh tells them that he will hire the best pandit for Jessica’s marriage. Sid thanks him. He wonders why is Rishabh acting sweet and selfless now. He doubts on Rishabh’s intentions. Sid and Ishani share a sweet coffee moment. They exchange their coffee mugs.

Ishani gets into a lovey dovey moment and runs away to hide her feelings from Sid. On the other hand, Juhi apologizes to Shashank for not believing him, and going with Vardaan’s decision. She regrets to not listen to him. He forgives her and also apologizes to her. He clears the misunderstandings of the past. He asks her if he is responsible for her divorce. She clears that Rahul is a changed person now, he has turned greedy and unethical. She tells him that the reason for her divorce is only Rahul. She asks him why didn’t he think of her career and just listen to Rahul. He tells her that he wanted to ensure her happiness with Rahul.

He regrets for his decision to fire her from job. Juhi and Shashank express their emotions. Juhi seeks his permission to ask him his feelings for her. She asks Shashank if he really loved her and if he still loves her. Her outright question stuns Shashank. What will be Shashank’s reply? Keep reading.