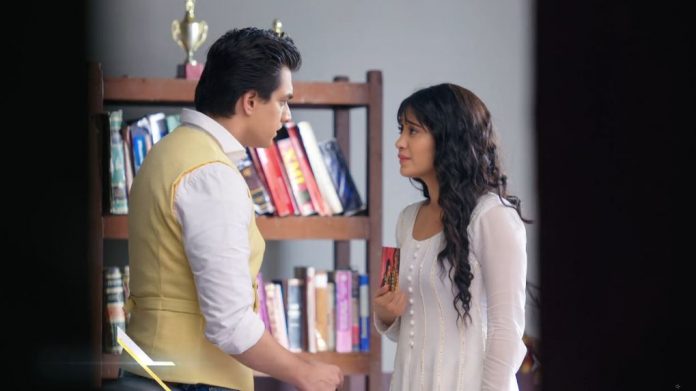 Yeh Rishta Titled Kairav marriage Vedika victimized Kartik and Naira express their loneliness and regrets over their past. They want to tell each other how much they longed and cried to unite. He tells her that he had to marry Vedika just for Dadi’s sake, since Dadi was really suffering and leaving her willingness to live. He tells her that he would have got saved from the unwanted marriage if Naira had come in time. He regrets that he got married to Vedika in a helpless situation. She asks him why didn’t he move on in these five years. He tells her that he can never move on, he just loves her and will be loyal to her.

He shows his faith on Naira and Mihir. Naira didn’t knew that Kartik realized his mistake years ago. He asks her why didn’t she trust his love. He tells her that he had angrily signed the divorce papers. She asks him why did he sign, he should have refused. He tells her that they can marry again, as its their record to get separated and unite. Naira accepts his cute marriage proposal. Kartik rejoices that they will marry and sort the custody fight out of the court.

He tells Naira that they will be uniting forever and live with Kairav. They decide to make Vedika a good friend and explain their situation. They have fun in the grocery storeroom and dance. The kidnappers know that they are intoxicated and would fall asleep in some time. Kartik and Naira have refreshingly cute moments while they plan their marriage right there in the storeroom. They arrange everything by their smartness.

Meanwhile, Vedika sinks in guilt that she has left Naira to die for a moment. She curses herself. She recalls that Naira saved her life. She thinks the marriage has changed her completely. She didn’t wish to leave her good side because of any reason. She sheds tears and wants to be good always.

Vedika gets to see her past memories. She gets worried. She doesn’t want her past to come out. She feels if her past comes out, then she will be punished. She doesn’t want anyone to know about her past relationship. Damini finds out Naira’s past in Goa. She wants to get the evidences to present in the court. She thinks she would win with ease and get Kartik his son. She feels proud of her smartness. Goenkas and Singhanias get tired of the Dandiya dance. They decide to go home and take some rest. Kairav misses Naira. He wants to go to her. Dadi doesn’t interrupt and lets Naksh take him home.

Kartik and Naira accept their mistakes and want to rectify. They regret for fighting before. They make love vows and begin to take the wedding rounds. The kidnappers find them crazy to light fire in the storeroom. Kartik tells them that they are just marrying around the pure fire. The kidnappers try to put off the fire and make them away. Kartik and Naira get angry that their marriage stopped.

Naira cries that she won’t leave her marriage incomplete. She asks Kartik to fill her hairline with his blood, the natural red colour. Kartik gets scared and cuts his thumb a little bit. They have a moment of marriage when he completes the sindoor ritual. Vedika learns about Kartik and Naira’s marriage. She is in shock over this truth. Damini challenges to defeat Naira in the court. Naira wants to prove the capabilities of a mother to Damini. She isn’t scared of anything, since she hasn’t done anything wrong.