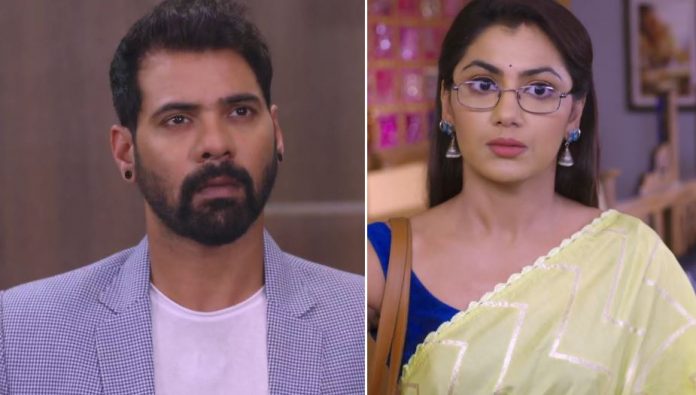 Kumkumm Bhagya Pragya falls for Abhi again Sanju waits for Prachi to impress her. He has got to know her address by following her. He wants to win Prachi’s love. He thinks to meet Pragya and apologize to her. He wants to ask for Prachi’s hand. Pragya stays tensed about Rishi’s bail. She thanks Disha for much help. She asks Disha to stay back home. Pragya learns that Abhi had called to talk to her. She is upset with him, but wants to talk to him. Disha laughs seeing her blushing face. Disha tells her that her feelings are very evident. Disha asks her to take the initiative and talk to Abhi.

Pragya really thinks of meeting Abhi. Disha pulls her leg. Pragya can’t help blushing and gets decked up. Disha knows Pragya loves Abhi a lot and its just her love that brought happiness in her life again. Sanju finds Prachi helping Sarita. He gets impressed. He likes her nature. He thinks Sarita is Prachi’s relative. He thinks to impress her in order to win Prachi. He doesn’t know its not easy to impress Sarita. He tries to tell about his background to Sarita. On the other hand, Priyanka is playing unfair with Rishi. She holds the victim look to fool people. She wins Abhi’s sympathy.

Priyanka tells Abhi that she didn’t deck up while she goes out. She wants Rishi to get punished. He believes her. He tells her that he will get Rishi punished. She wants to compel Rishi for marriage. Disha asks Pragya to go with Ritik. Pragya doesn’t like bothering her. Disha asks her not to stress herself. Ritik tells Disha that he came on her call. He wants Disha to like her. Sanju tells Sarita that he will help her while she does the shopping. She buys grocery. Sanju bargains and tries to impress her further. Sanju tells her that he will drop her home.

Abhi gets Priyanka to the police station to record her statement. He doesn’t want her to go through any trauma. He rushes with the formalities. Sanju fails in his plans, but doesn’t lose hope. He gets filmi and determined to win love. Sarita tells Prachi about Sanju, who was just trying to impress her. Prachi fails to see Sanju. Sarita asks Prachi not to be so good. Priyanka cries out when she gets interrogated. She feels tensed and expresses her sorrow in a way that she admits her crime.

She acts victimized. Abhi consoles her. Rishi loses his cool on seeing her. Pragya and Abhi meet in the police station again. She realizes he isn’t wrong since Priyanka is the culprit who fooled Abhi by her fake tears. She wants to expose Priyanka’s ugly truth. She knows that once the truth comes out, Abhi will never support Priyanka.