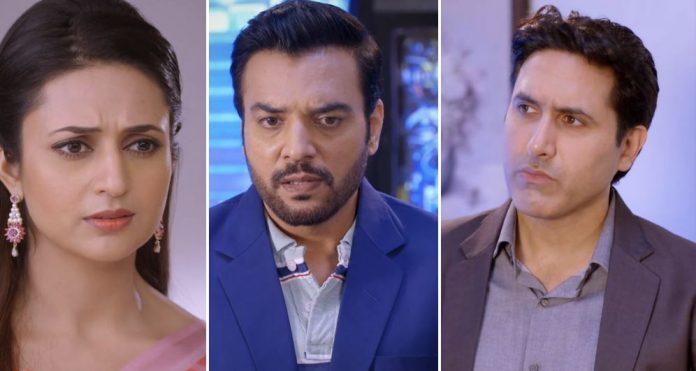 Mohabbatein Ishita Raman Mani sense huge trap Ishita gets disturbed realizing that her presence is panicking Neeti. She wants to know if they are connected in the past. She thinks when did they meet, how does Neeti know her that she reacted this way. Arijit feels sorry seeing Neeti in pain. He can’t go to her since he can’t express his concern for his daughter in front of Ishita and Bhuvan. He cries out secretly. Bhuvan tells them that they should make a leave before anyone spots them. He asks Arijit not to fall in trouble. Arijit doesn’t want to leave Neeti alone. Bhuvan tells him that they can get caught. He convinces Arijit to come with him.

He tells that they shouldn’t take risk for Neeti, who is a stranger for them. Arijit gets helpless. Ishita tells Mihika that Neeti reacted bad on seeing her. She wonders what’s their connection. Mihika asks her not to get involved in any stranger’s matter and focus on her own life. She asks Ishita to stay happy with Raman. Meanwhile, Sunil tells Bhuvan that Natasha is framed in a murder case by Bhallas. He asks Bhuvan to help him in freeing Natasha from the jail. Bhuvan doesn’t let him know that he is the blackmailer, who had witnessed Sunil stabbing the doctor.

He acts ignorant. He tells Sunil that Arijit may help him, but for a price. Sunil is ready to do anything to get Natasha freed. He tells that Arijit can surely help them like before, since he has many good contacts. Bhuvan calls up Arijit and shares his plan of sending Sunil to the hospital to wipe off Neeti’s records from the system. Bhuvan asks Sunil to do as instructed. He promises to get Natasha out soon.

Later on, Raman learns that Ishita had gone to meet Neeti. The doctor advises her not to meet Neeti, who isn’t responding well. asks Ishita why doesn’t she understand his concern. He is angry that she always invites troubles. He reprimands Ishita for her actions. Ishita assures that she won’t meet Neeti again. Raman sends her home. Ishita performs the puja and misses Pihu. She thinks of Neeti, who is also like Pihu for her. She worries for Neeti. Mani meets Bhallas after a long time. He finds Ishita too worried. He asks her the matter. She tells him about Mrs. Bhalla’s illness, for which she is being treated at a hospital. He knows the matter is something different, she would be hiding something. He asks her to share the matter so that he can help.

Ishita shares about meeting Neeti. Mani feels he knows about Neeti. He assures Ishita that he will help her. He tells that Neeti is the CEO of their rival company. He doesn’t know who is using Neeti’s name if she is hospitalized. He tells that they should meet Neeti and her family. Ishita tells him that Neeti just have her dad, who isn’t being with her these days. She finds her dad a careless man. She likes Mani’s idea.

She wants to try and meet Neeti’s family. Bhuvan drops Sunil to the hospital to corrupt the computer systems. He gets glad to know that Sunil has completed the tricky task. He learns that Bhallas are finding Neeti. He wonders how do they know about her. He informs Arijit that Neeti will be caught by Bhallas. Arijit gets panicking. He shifts Neeti to other place. Ishita doesn’t find Neeti anywhere. She feels someone has kidnapped her. Mani and Raman realize someone’s conspiracy behind this, since Neeti’s records get deleted from the system. They want to know how is Neeti related to them.