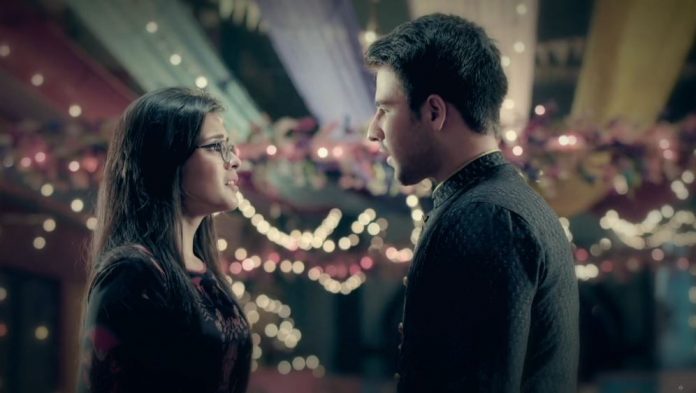 Ye Rishte Pyar Ke Mishti Kunal Shocking row Abir and Mishti unite in their romantic performance. Abir fulfills the challenge given by Mishti. Kunal gets angered to see Mishti trapping Abir. He feels she is ruining Abir’s life. He wants to fail her motives. He waits for the lawyer to execute his plan soon. Mishti gets blushing by Abir’s gestures. Kuhu looks for Kunal. She tries to show the winning trophy. She finds him meeting a lawyer. She gets a huge shock when she learns that Kunal is going to divorce her. She can’t believe this. She feels she has failed to win Kunal’s heart. The trophy breaks by her hands. Kunal tells her that he will soon sign the papers.

He asks her to accept the truth that their marriage is over. He tells that he may not continue the drama to stay happy in their relation. He tells that she maybe doing drama always, but he doesn’t want to act further. He tells that if he divorces her, Maheshwaris will never let Mishti and Abir’s alliance form. He is sure that Maheshwaris will really condemn Rajvansh family on knowing about the divorce. Kuhu shatters down. Mishti learns about Kuhu’s sorrow. She questions her about Kunal. She convinces Kuhu to trust her once and share the matter. Kuhu feels like a loser.

She tells Mishti that Kunal wants to divorce her, just to break Mishti and Abir’s alliance. Mishti gets a huge shock on checking the legal documents. Kuhu tells Mishti that Kunal doesn’t love, he just wanted to break Mishti and Abir. She reveals that he had run away on the marriage day and unwillingly came to the mandap. She tells that Kunal never had interest in their relationship. Mishti can’t let Kunal play with Kuhu’s feelings. She knows Kuhu loves him a lot. She doesn’t want him to play with Kuhu’s heart. She slaps Kunal in front of the people. She tells him that he doesn’t deserve Kuhu, he is a loser who doesn’t deserve true love.

Abir witnesses the shocking slap and asks Mishti to reveal the matter. Kunal and Mishti get into a heated argument. Abir learns about Kunal’s divorce move. Abir is left in a shock. He asks Kunal if this is true. Kunal gets speechless in front of Abir. Abir asks him what about his love for Kuhu. Mishti tells Abir that Kunal never loved Kuhu and wanted to avoid the marriage. She tells that Kunal pretended good just to break them apart. Abir can’t believe that his brother fell so low, being blind in hatred. Kunal confesses that he did the drama on Meenakshi’s word. He reveals that he doesn’t love Kuhu, he wants to get rid of her by ending the forced marriage.

Mishti learns that Abir knew about Kunal’s eloping. She asks Abir why did he not tell her before. Abir believed that Kunal loves Kuhu. Mishti asks Kunal how can he take revenge on Kuhu for rejection. She explains that the rejection was not to hurt him but save their future. She tells that they would never be happy together, so she called off their engagement. She didn’t know Kunal will take this on his ego and ruin Kuhu’s life. Abir tries to end their fight.

He supports Mishti. Mishti wants to support Kuhu. Kuhu asks Mishti not to decide for her, she will be deciding for her own life. She doesn’t want to give up on her marriage so soon. Abir regrets that Kunal ruined two lives in anger. Mishti gets angry on Abir and wants to stay away from him until he fixes Kunal’s mistake. She asks Abir to normalize things in his family first. Abir decides to keep Mishti’s respect in his family. He promises to fulfill each of his promise.